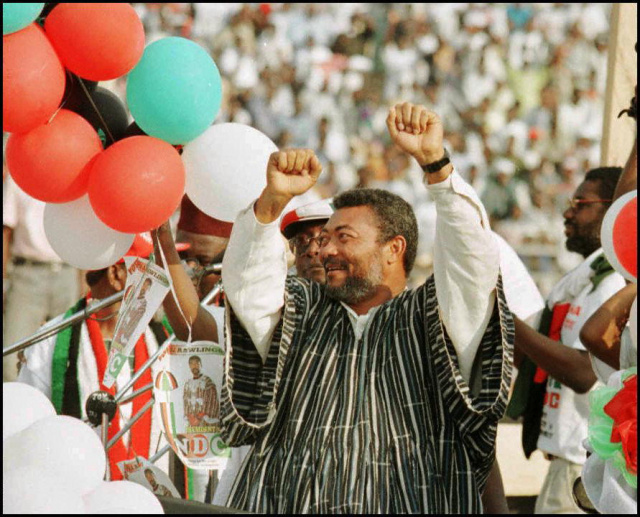 (FILES) In this file photo taken on July 26, 1996 Ghana President Jerry Rawlings, candidate for his pre-pro succession to the presidential election, gestures at the Accra Stadium where he led his last meeting in the presence of more than 60,000 people. Ghana's former leader Jerry Rawlings, who towered over the West African nation for two decades first as military ruler and then as elected president, has died aged 73, his party said on November 12, 2020. (Issouf SANOGO / AFP)

(AFP) - Jerry Rawlings, who died Thursday aged 73, was a hulking figure who towered over West African nation Ghana for two decades first as military leader and then elected president.

A former air force flight lieutenant, Rawlings twice overthrew governments through coups in 1979 and 1981 and stamped his authority on the nation of 30 million with an uncompromising reputation.

The son of a Scottish father and Ghanaian mother, he became a national icon as he headed Ghana for 20 years until 2001, being voted in as president at the ballot box in 1992 and ushering in democracy.

For Rawlings, a larger-than-life bear of a man with a glowering stare, the first taste of power came in 1979 when he banded together with other junior officers frustrated over widespread corruption to take control.

An initial coup attempt he led in May failed and he was put on trial and sentenced to death but before he could be executed his co-plotters helped oust then military leader Frederick Akuffo in June.

But Rawlings remained a major player and within just over a year he was back in charge.

As Ghana's economy struggled, on 31 December 1981 he turfed out Limann and his weak civilian government, imprisoning the former president and dozens of other politicians.

Back at the helm, Rawlings founded the National Democratic Congress (NDC) and launched on a populist programme of reforms including the establishment of workers committees inspired by Cold War superpower the Soviet Union and its ally Cuba.

But the moves failed to stem the financial woes and the leader changed tack to more conservative free-market measures that eventually bolstered Ghana's economy to one of Africa's best performing by the 1990s.

In 1992, Rawlings won Ghana's first election since 1979 in a one-sided vote where he held all the cards and went on to claim a second term in 1996 before relinquishing power for the last time in 2001.

He then saw the country led by the rival New Patriotic Party (NPP) until 2008, when his former deputy John Atta Mills was elected on behalf of the NDC.

Rawlings was widely reported to have been frustrated by the leadership of Mills, who died in 2012, in part because the top brass of the NDC were not always willing to go along with his plans.

But he remained a high-profile figure in Ghanaian politics and his wife Nana Konadu Rawlings tried but failed to launch her own bid for the presidency in 2011.

Her campaign led to speculation over whether the former coup leader turned president was seeking to restore what some saw as his waning influence by a variety of means.

Rawlings however continued to remain respected in the NDC although he has had frosty relations with John Mahama, who was president between 2012 and 2017 and is currently looking to unseat incumbent Nana Akufo-Addo in elections this December.

General » Be a reporter: Write and send your article » Subscribe for news alert
Tags: Ghana, Rawlings