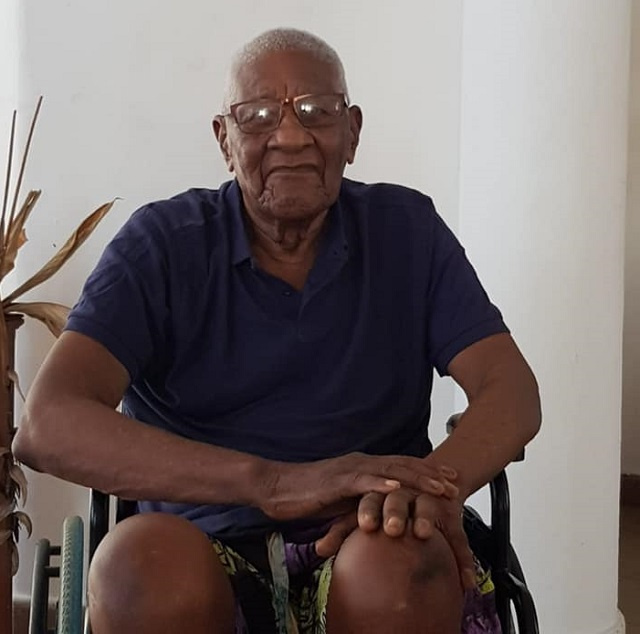 Jolicoeur, who was born on March 22, 1922, joined the British Army to fight in the World War II at the age of 19 when Seychelles was a British colony. (Lindy Vital)

Jolicoeur will be laid to rest on Wednesday at 2 p.m. local time at the Ste Therese church of Plaisance.

The veteran who was born on March 22, 1922, joined the British Army to fight in the World War II at the age of 19 when Seychelles was a British colony.

He was among some 700 Seychellois men drafted for military operations during the six-year war. Jolicoeur was part of a corps of soldiers known as Desert Logistics who provided support services which included supplies and ammunition to the Infantry.

World War II began with Germany's invasion of Poland in 1939 and ended six years later in 1945. Over four million men and women from Britain's colonies throughout the world volunteered for service during the two world wars. Being under British rule since 1814, the Seychelles archipelago of 115 islands situated in the western Indian Ocean was no exception, and many Seychellois volunteered to go to war, serving alongside the British.

Jolicoeur joined in 1940 and saw battle in the deserts of North Africa, mainly Egypt, Libya, Morocco and Algeria in what was known as the North African campaign. He also crossed the Mediterranean Sea to participate in the war effort in Italy.

He was a well-known figure in Belvedere, a sub district of Plaisance, and even at a very late stage of his life, Jolicoeur could be seen doing daily activities.

He loved recounting his war experience and he will be remembered for his 'very sharp memory,' said his son, Shelton Jolicoeur, a lawyer, who told SNA that his dad enjoyed history.

'Even in his advanced age, he would always keep abreast with world affairs and politics. He was never one to shy away from speaking his mind,' said Shelton Jolicoeur.

He remembers his dad as a "good and discipline person who inculcated good values in his children."

The World War II veteran was also a member of the local Ex-Servicemen Association and the current chairperson, Yvon Bastienne, said that Joliecoeur "was a very active member of the association until very recently."

The elected Member of the National Assembly for Plaisance, Richard Labrosse, who lives at Belvedere, said Jolicoeur was a pillar of his community.

"I remember him very well in my childhood and he was well respected in our community as he was a man of principles."

Labrosse reminisced about the time when Joliecoeur had a farm on his property, where people would go and help out for some money.

"I last saw Mr. Joliecoeur during my campaign to be elected MNA for my district, he gave me his blessings, something I will forever treasure."

Jolicoeur is survived by three of his four children: Shelton, Kennedy and Monica.

With the passing away of Jolicoeur, the only remaining Seychellois who participated in World War II is France Joubert, who lives at Mont Fleuri.

The over 300 brave Seychellois who sacrificed their lives in not only World War I but the Second World War as well are honoured every year on Remembrance Sunday. The day which is observed on the Sunday nearest to Armistice Day on November 11 has today evolved to pay homage to all soldiers who have paid the ultimate price for their country since then.

A ceremony is organised at the Mont Fleuri cemetery on the outskirts of the capital of Victoria, where the names of the Seychellois servicemen who died in both World Wars are listed.

'Unsinkable' vessel with storied history to be restored to former glory