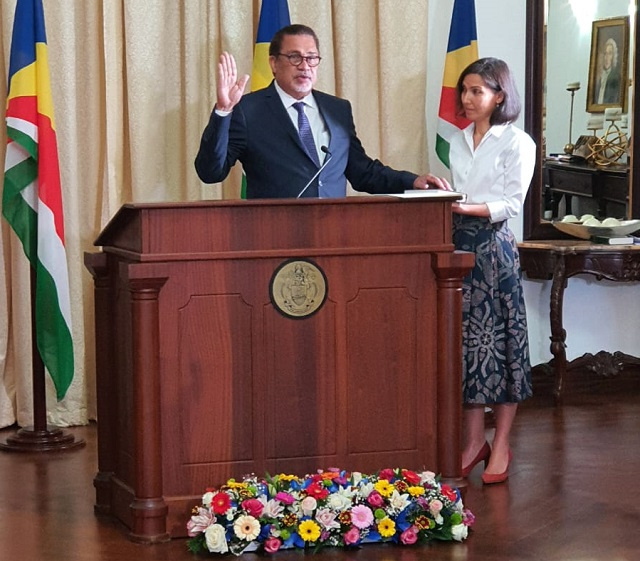 Radegonde was sworn in as the Minister of Foreign Affairs and Tourism. (Daniel Laurence, Seychelles News Agency)

(Seychelles News Agency) - The sea, sun and natural environment are no longer sufficient on their own to sustain the Seychelles' tourism industry, the new Minister for Foreign Affairs and Tourism said Monday.

Sylvestre Radegonde spoke after he was sworn in as minister at State House in the presence of President Wavel Ramkalawan. Another minister, Billy Rangasamy, now in charge of land and housing, was also sworn in. Both ministers were sworn in late because of their 14-day quarantine as per COVID-19 prevention measures in place.

Ramkalawan congratulated both new ministers and expressed his conviction that they are both ready to undertake their new tasks.

Radegonde told reporters that aside from bringing tourists in Seychelles, the country needs to relook at its services and products that will entice tourists to spend.

"People say that Seychelles is expensive, but the feeling that I have gathered is that they do not mind spending, but the service and products have to be up to standards. Sun, sea and the environment are no longer enough as we are competing with other countries with the same climate," he added.

Radegonde, who has lived for 15 years in Europe, said that he understands the dynamics of the market and Seychelles will need to maintain a balance between the health of the population, visitors and the economy.

On his experience in foreign affairs, Radegonde said that he will further strengthen diplomatic ties with friendly countries and will look for areas for new cooperation.

The new foreign affairs and tourism minister joined the diplomatic service in December 1976. He has served as Secretary General of the Indian Ocean Commission (IOC) and High Commissioner of Seychelles to Kuala Lumpur Malaysia.

Before his new appointment as minister, he was the resident ambassador of Seychelles in France. He has extensive experience in international relations, political affairs and diplomacy.

Rangasamy, the Minister of Land and Housing, said he is "enormously excited to take up this new position. When I was first approached to become minister, I took a while to ponder on it and to ask for God's guidance. I have a wealth of experience. I have now reached the age of 54 and I feel that the right time has come for me to play a greater role to help my country."

He added that "under my portfolio, there is the land component. I have gained the expertise of how the land can be developed. Another component is housing. I have once been the director general of projects at the ministry and I am already aware of the different constraints that exist."

Rangasamy said that he is going to relook at the point system to allocate houses and to adjust the different policies if need be.

An engineer by profession who has practised in the United Kingdom, Canada, the Gulf and Seychelles, Rangasamy holds a Master of Science in concrete structures from Imperial College London and at the University of London, a Bachelor of Engineering in civil engineering. He has experience in construction and has worked in several countries.

The new Cabinet comprises of 13 ministers who were all approved by the National Assembly of Seychelles, a group of 115 islands in the western Indian Ocean.