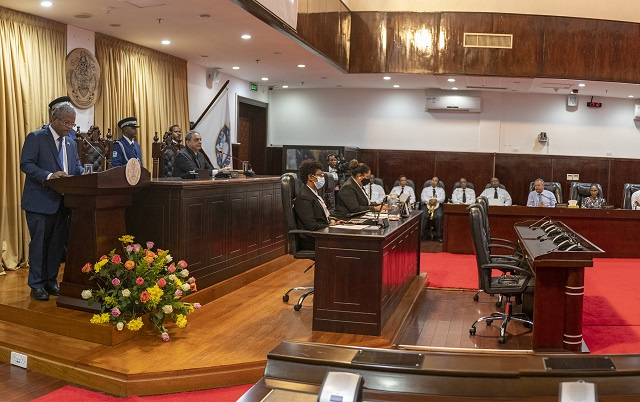 (Seychelles News Agency) - Seychelles will close three of its overseas embassies and government and private sector employees will not be paid a 13th month of salary this year, two major steps the government is taking to curb expenditures amid the financial crunch caused by COVID-19.

The announcement was made by President Wavel Ramkalawan in his first address to the National Assembly on Tuesday.

In a bit of unexpected good news, the president announced that an anonymous donor has pledged to buy 100,000 doses of a COVID-19 vaccine for Seychelles when it becomes available.

Before the vaccine arrives, though, Seychelles is in for rough financial times. The head of state of Seychelles, an archipelago in the western Indian Ocean, said that in the 24 days he has been in his office his worse fears have been confirmed.

"In just a few words let me say that the Seychelles' economy is really bad. In view of this situation, there are several measures that will be implemented to ensure that our expenditures is done in a more efficient manner possible by prioritising our expenditures and ensuring that our budget is sustainable," he said.

Ramkalawan said that the debt of Seychelles is already unsustainable and if this continues, the result will be catastrophic for the island nation.

"We have in fact seen that the situation in our key tourism markets in Europe has deteriorated and some have gone back into lockdown. This has resulted in some airlines suspending their operations to Seychelles such as Ethiopians Airlines and British Airways," he added.

The president also announced the cancellation of the scheduled elections of district councils in January.

"With the economic situation we are going through, the country is not in a position to spend 20 million rupees to organise this election and according to the tariff for the payment of the regional council members, to spend 3.12 million for the chairmen of the district councils, and another 15.28 million per month. This means that per month we would have to spend a total of 18.4 million and for a year it gives a total of 38.4 million ($1.65million). We don't have this money," said Ramkalawan.

He also announced that with the aim of reinforcing all efforts to relaunch the economy, the government is already in negotiation with the International Monetary Fund (IMF) to assist Seychelles to address high public debt, price stability and balance of payment crisis.

The President also said that as part of the government’s efforts to address the cost of living, the Indian government has agreed to make a donation to put photovoltaic panels on the roof of the Seychelles Trading Company (STC) hypermarket at Bois de Rose to reduce its electricity bills.

Ramkalawan said that the government's offices in Sri Lanka, Cuba and Geneva will close in order to reduce expenses.

"We will also make more effort for our embassies to work closely with our tourism offices. Seychelles will take the approach of working tougher as a government where its foreign relations are concerned. So all ministries, departments and agencies that their functions have an impact on our foreign relations will work closely with the Ministry of Foreign Affairs and Tourism," he said.

The President also shared some good news he received after the announcement that a new vaccine with around 95 percent effectiveness against COVID has been produced by a company called Moderna.

"The good news is that an investor who wants to remain anonymous for now has promised to give Seychelles 100,000 of the vaccines the moment it is commercialised early 2021. On behalf of the people of Seychelles I would like to thank the investor for the support that gives us great encouragement," he said.

Ramkalawan said that until such time every citizen needs to practice the measures of prevention.

"As we relaunch our economy and welcome more visitors it is absolutely important that all of us citizens without exception practice prevention measures with more personal and collective engagement. We must do this so that the nightmare of community transmission does not happen... We have to thank the team led by Dr. Jude Gedeon and Dr. Louange for the extraordinary work," he added.

The president called on citizens of Seychelles to put "working hard, a change in attitude and a bigger sense of patriotism as the new philosophy so that when things improve in our country no one will stop this little Seychelles. For all workers, I would like to tell you courage and all the best."