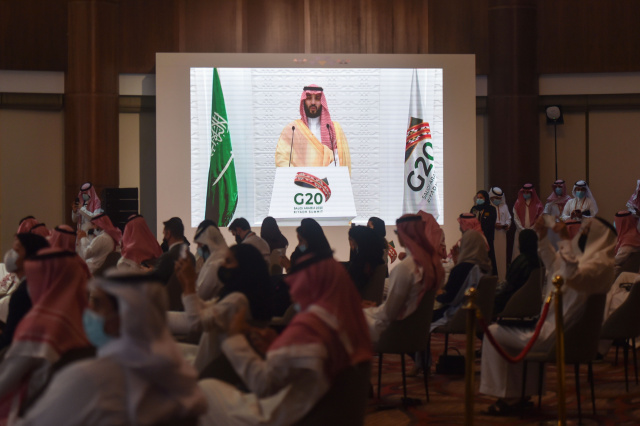 (AFP) - The G20 promised Sunday to tackle the explosive issue of developing-nation debt, but failed to stake out any clear action, infuriating campaigners warning of a looming crisis.

The leaders of the world's 20 richest nations reiterated their commitment to a moratorium agreed in April and extended in October allowing poorer countries to temporarily stop servicing eligible debt to focus their resources on combatting the coronavirus crisis.

The so-called Debt Service Suspension Initiative (DSSI) will be extended through to June 30, 2021, the final statement confirmed.

Currently 46 out of 73 eligible nations have benefited from a suspension of interest payments to the tune of $5.7 billion.

Though Saudi Finance Minister Mohammed al-Jadaan called it "a major breakthrough", it is a drop in the ocean compared to the $11 trillion the G20 nations have spent to combat the economic effects of the pandemic.

The UN had hoped that the extension would run to the end of 2021, but instead the G20 said its foreign ministers would review the situation in the spring.

Painfully aware that the DSSI alone will not be enough for some countries, the G20 has agreed a common framework to restructure the debt of certain nations.

That framework has been called "historic" because for the first time it includes private creditors and China, the world's leading creditor to poorer countries, accounting for 63 percent of all such loans extended by G20 nations at the end of 2019.

- 'Draining out the Titanic' -

"(But) it only considers debt forgiveness as a final option --  and it isn't binding," warned Jandeaux.

"There is a lack of participation from private creditors, and we strongly encourage them to participate on comparable terms when requested by eligible countries," the final statement said.

But time is running out.

On Wednesday Zambia, facing a refusal by private lenders to temporarily freeze its debt repayments, defaulted.

It is the first African nation to do so during the novel coronavirus pandemic.

The same day, Bolivia said it expected to temporarily stop servicing its debts until its economic condition had improved.

Fears are growing that debt crises in developing nations could hamstring their ability to vaccinate their people.

In March, panicked investors pulled out $82 billion of capital from developing nations in a matter of days.

Since then, they have fallen foul of a vicious cycle of increasing costs to combat the pandemic coupled with diminished income.

Remittances by migrant workers have been particularly hard hit.

As a result, developing nations will this year have access to $700 billion less of external financing than in 2019, according to the Organisation for Economic Co-operation and Development.

The DSSI is like "draining out the Titanic with a bucket" according to the European Network on Debt and Development.

"The list of countries involved is too small," said Oxfam France's Jandeaux.

Middle-income countries like Lebanon are excluded, while others such as Kenya have declined to seek DSSI relief for fear of a credit rating downgrade that would see their borrowing costs increase, as happened in Cameroon.