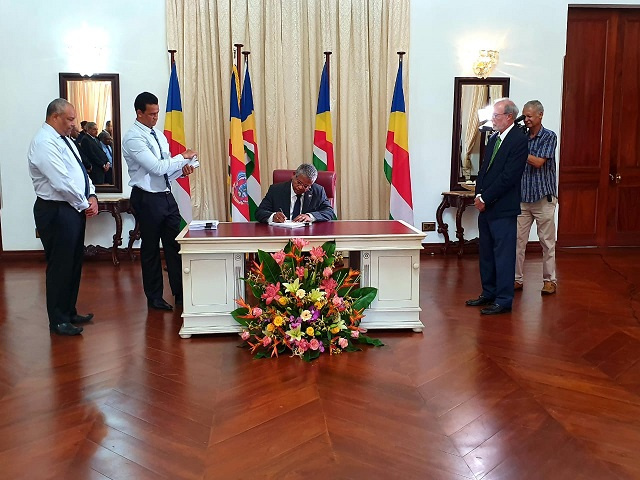 (Seychelles News Agency) - The President of Seychelles on Monday agreed to revise the 1975-era Civil Code so that modern law reflects Seychelles' current social construct and the human rights provisions of the Constitution adopted in 1993.

The code was the first piece of legislation President Wavel Ramkalawan assented to since taking office.

"I was also among the members of the National Assembly who deliberated on the amendments. I feel proud to have learned that I have been part of revising a law that is second after the Constitution, which is the supreme law," said Ramkalawan in his address at State House.

He said that the Civil Code is now entirely Seychellois-made and he personally proposed a number of changes and "the most important one was when we agreed that there should be no child marriage in Seychelles."

The status of legitimacy and illegitimacy has been removed to comply with the equality of rights provisions in the Constitution.

"It is not automatic that if you are the child of someone that you will be legitimate to inherit the benefits. The message is clear: love your parents and if you do the possibility to inherit is greater," said Ramkalawan.

The proposals for the revised Civil Code were based on the report of a Civil Code revision committee, chaired by the previous Chief Justice, Mathilda Twomey, and Bernard Georges, who chaired the bill's committee in the sixth National Assembly.

Georges, who is the Leader of Government Business in the seventh National Assembly, said that on the issue of marriage, a couple who have separated for more than five years would be able to use this ground in a court of law to get a divorce.

Although the legislation has received the president's assent, judges would not be able to base their judgments or rulings on those grounds found in the new law if the case is already being heard before the court.

Kieran Shah, a member of the Civil Code Revision Committee, said that it is a great pride for the committee to have produced a comprehensive code made in Seychelles by Seychellois jurists.

"We have created more fairness in the laws ensuring that no unmarried partner would lose out totally upon the termination of a relationship," he said.

Shah added that the new Civil Code "sets out everything that a person can do and be responsible for from birth to death, namely in a nutshell, the person's right as a child and adult, marriage and divorce, purchase and sale of property, contractual and tortious rights and obligations."

With the evolution of society and development in Seychelles, Shah said that under the new legislation, the law of nuisance was expanded to promote good neighbourly relations to sanction disturbance by noise, smell and pollution.

The amendments were aimed at only 10 percent of the Civil Code of Seychelles, an archipelago in the western Indian Ocean. The remaining 90 percent has not been touched.