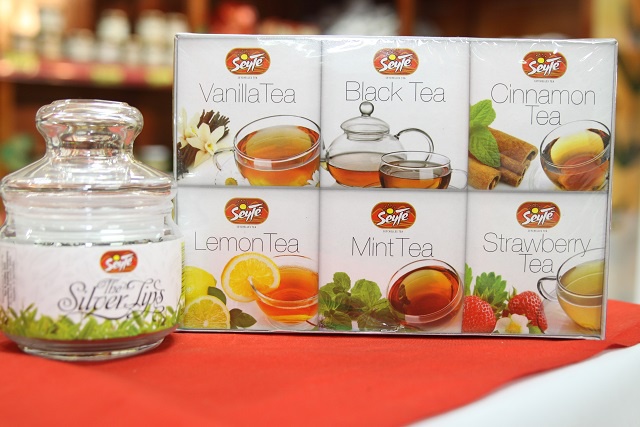 (Seychelles News Agency) - More than a decade since it last introduced flavored tea, the Seychelles Trading Company (STC) has launched its new range of flavored tea as well as the high class Silver Tips which are produced and packed at the only tea plantation and factory situated in the hills of Morne Blanc, Port Glaud in the Western part of the Seychelles main island of Mahé.

The loose tea produced under its well known brand name 'SeyTe', comes in packs and selection boxes, comprising of six unique blends, strawberry, lemon, mint, cinnamon, vanilla and black tea. Whereas the Silver Tips described as the ‘finest of teas’ come in clear jars of 70 grams and 35 grams.

“It’s been quite a long time since we have had new tea products. Before we have had the tourists range with few flavors. Today is a unique launch,” Priyanga Tennege, the Manager of the Tea and Coffee Unit at the STC, told SNA in an interview.

The new flavored teas are said to offer the public as well as visitors to Seychelles, an additional option on the local beverage market.

“There is great demand for the ‘SeyTe’ locally. The market is there. We have taken in mind that people are tending to move away from fizzy drinks. The flavored teas are one of the alternative and best ways to refresh oneself,” said Tennege.

“Also when Seychellois and tourists alike leave Seychelles they want to carry souvenirs of our tea. This is the best thing to carrywhich at the same time helps to promote ‘SeyTe’,” added Tennege.

STC describes the newly launched Silver Tea as “containing the highest amount of Bio-chemical compounds that have aphrodisiac and pharmacological properties that prevent many degenerating diseases”.

“Silver tea is the tip of the tea tree. When tea leaves are plucked they should have two leaves and a bud. It’s only the bud that is used for the Silver Tip tea. Each bud is handpicked one by one. So it’s like crafted tea. It goes through a different process and comes out white. It’s often called the white or silver tea or the silver needle. It’s a very expensive tea. It’s like a liqueur. You usually have it after dinner. It can be mixed with more ingredients like cardamoms, cloves or plainly brewed but very lightly,” explained Tennege.

The new flavoured tea was presented to consumers during a short ceremony, held at the STC’s main supermarket, in downtown Victoria, the Seychelles capital city.

Customers present at the launch were served the tea ice cold or hot with a slice of lemon.

“Very good, and impressive. I like the strawberry flavored since my favourite fruit is strawberry. I think I will stop buying the vanilla tea for a while and try this new one,” one young man told SNA.

“I’ve tried the mint flavored. Nice taste. It’s refreshing. I’m on a diet right now so it will help get rid of the fat,” said another customer, Marie-Helene Sinon, a lady in her late fifties.

Tennege has said that ‘SeyTe’ is moving from strength to strength since tea production begun back in 1966 in the Seychelles archipelago with the construction of the tea factory at Morne Blanc.

“Our teas are being sought out by many tourists from different parts of the world. It’s unique from other tea plantations worldwide. It’s the best. We don’t use any chemicals and pesticide compared with other producing countries. We don’t spray at all. It’s 100 percent organic,” he added.

STC sells both 100 percent local tea as well as the blended type used especially in the teabags which is mixed at no equal amount with imported tea from Sri Lanka.

“When we blend, there are various things we need to consider for example the liqueur and colour of the tea as teas are graded," Tennege explained.

Tea from Sri Lanka is used for the blending because it is said to be one of the best in the world.

“When we compare the prices and quality of tea from Sri Lanka it is good. It suits well with our local tea. At the same time, the machinery we use here for manufacturing is compatible to that of Sri Lanka.”

In the interview this morning, Tennege said that for the time being STC is not exporting its teas on a commercial scale.

“In the past, we have sent small orders of ‘SeyTe’ to customers in Germany, Japan and France. Only on a small scale,” pointed out Tennege.

It’s to be noted that in 1966, following the construction of the tea factory, Seychelles' tea was not only produced for local consumption but it was also exported to the United Kingdom, Germany and Japan.

“But we’re hoping to export once we get organised. We’ve had lots of enquiries especially from a client in Germany who wants to import our teas in larger quantities. They’ve done the chemical test for clearance. They say it is very good. But commercially, we do not have the facility at the moment to export in that quantity.”

Tea, said to be the second most widely consumed beverage after water, was introduced in Seychelles in 1960 by Scottish tea planter, Bill Henderson who is said to be residing in Australia.

Described as the pioneer of Seychelles tea, in 1961, Henderson together with another fellow tea planter brought 1000 kilograms of seeds from Kenya to Seychelles where he later opened the first tea seed nursery at Port Glaud in what’s known today as field number four where the present organic tea garden is located.

Back then, around 300 acres of land was chosen for planting, in the hills of Morne Blanc. In 1988 when the Seychelles Marketing Board (SMB) took over the tea production from an Italian company known as GMR, the tea plantation covered some 43 hectares of land. To date, this has been scaled down with the plantation divided up into 20 fields.

Not only does Morne Blanc commend a spectacular view of the west coast of Mahe, but also the cool mountain air makes it conducive to tea planting.

Tea leaves and buds are plucked manually everyday by the 34 workers- of which mostly are women- at the tea plantation. Each collects about 30 kilos of tea leaves per day.

From plucking, the tender green leaves collected are sent through several processes- from spreading, withering, rolling, fermenting, drying and grading- before they are packed to what we see on the shelves in shops.  The whole process can take up to two days.

Currently the Morne Blanc tea factory produces between 50,000 kgs and 80,000 kgs of black tea per year mainly for local consumption.

Tennege explained to SNA that STC employs what is called practices vegetative propagated tea planting, adding that its tea at the Morne Blanc plantation and that it does selective replanting of tea seeds.

Subsequent to the 'SeyTe' brand name being introduced, the Tea Tavern -which is today privately owned- opened its doors around 1970 and five years later saw the visit of Princess Margaret of Britain to the Tea Tavern which up to date is a major tourist attraction.

STC says it has plans to expand the tea factory in the future and improve its surroundings to become an eco-tourism area where the history of the place blends with the breathtaking environment of the tea plantation.

“So people can visit the tea plantation and factory, have tea at the tavern, relax and enjoy the scenery of the natural park,” noted Tennege.

The tea factory is open every day except on Public Holidays and Sundays with guided tours of the fields and the factory as well.

The new flavored teas are being made available on mainland Mahé, Praslin and La Digue, the second and third largest islands in the archipelago.

The black tea is selling for $3 a box whereas the other flavors are selling at $2 a box. As for the Silver Tips being a high brand tea it is selling at $27 and $60 a jar.

Due to increased competition with different brands of tea that is imported in the country, STC plans to introduce the newly launched flavored teas in teabags soon at the same time design new packaging for its other existing tea products.