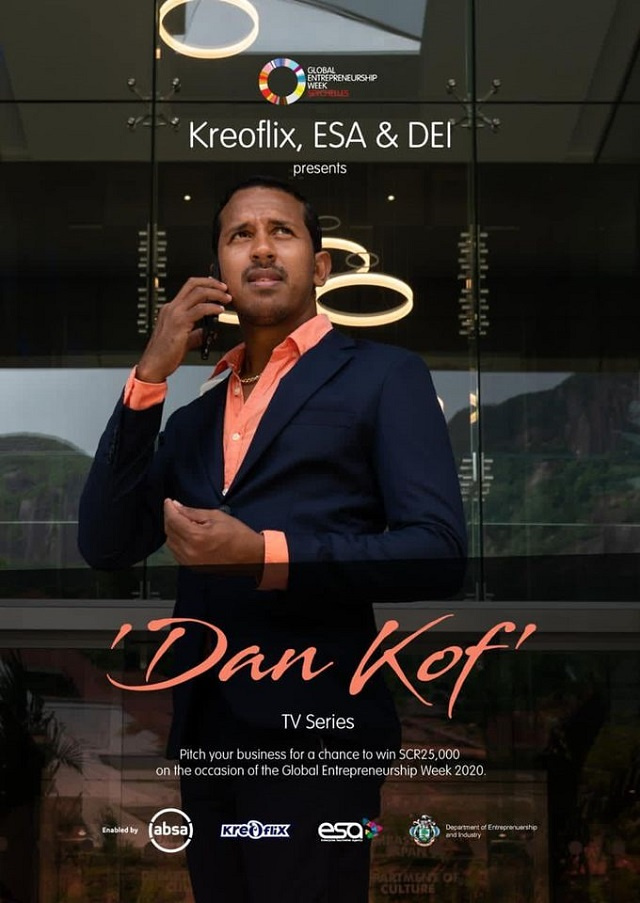 Dan Kof' has been modelled off Dragon's Den and Shark Tank but has been modified for Seychelles. (Department of Entrepreneurship and Industry/Facebook)

(Seychelles News Agency) - Six Seychellois will battle one another, pitching and marketing their businesses or services to a panel of judges, in a race to win the main prize of a soon-to-air TV series in Seychelles.

The series dubbed 'Dan Kof' -- Creole for 'In the coffer' -- is the brainchild of Aubrey Philo, one of the co-founders of a newly-established media house, Kreoflix.

Philo told SNA on Wednesday that he always wanted to make this programme come to life as a person who loves watching 'Dragons' Den', a reality show that allows entrepreneurs an opportunity to present their business ideas to a panel of five wealthy investors.

'Dan Kof' has been modelled off Dragon's Den and Shark Tank but has been modified for Seychelles. Instead of people pitching their ideas to a panel of businessmen who will offer their money, it will rather be a competition, at the end of which the winner gets prize money of SCR25,000 ($1,200), he said.

The aim of the series, expected to air in December on the Seychelles Broadcasting Corporation (SBC) television for five consecutive days, is to inspire potential entrepreneurs to come forth and work on their business ideas.

"It is important to get people to inculcate in themselves the habit of entrepreneurship. We want people, not only the audience but those who have pitched their ideas to get used to entrepreneurship, especially now during COVID where jobs are becoming scarcer. Instead of giving up, what can you do? Is there an opportunity in these difficulties? We can follow the example of the people who are participating in the show. It is not always easy but at least tries," said Philo.

He added that negotiations are being held with Telesesel, another local TV channel, to air the show as well so that "we get to maximise the number of people who see it."

The idea to have such a TV series was pitched to the Department of Entrepreneurship and Industry when Philo and his business partner, Patsy Athanase, learned that Seychelles would be hosting this year's Global Entrepreneurship Week.

To make the show a reality, Enterprise Seychelles Agency (ESA), the Department of Entrepreneurship and Industry, the Global Entrepreneurship Week Seychelles, Kreoflix, and ABSA bank which is the financial backing behind the project, came together as partners.

A total of 17 entrepreneurs applied to participate and after the organisers shortlisted the applicants, six people will be participating in the TV series. Each partner is bringing forth a judge, who will give points to the participants based on how they pitch their product or service, their marketing or saleability, how well they know their product or service among other criteria. At the end of the TV show, the points will be summed up to reveal the winner.

Talking about the reward money, Philo said that the SCR25,000 should be okay for someone who is running a cottage industry "but we thought that during COVID, it is not necessarily someone who is kicking off."

He added that there are businesses already in operation but might need a top-up and during this tough time Seychelles is in, any little help that one can get is good.

"SCR25,000, with the rising forex cost, might not be enough but it is a start. When shortlisting some of the projects presented to us, we realised that the price won't be enough for the person and we said that at the moment it is not worth it to go on tv with the project," said Philo.

He said that after talking to applicants who did not make it for the pilot season "we are already eyeing a second season. It won't necessarily be produced for the entrepreneurship week but it is something that we can kick off before November next year."

The first season will be for businesses in technology, food, decorating, alternative medicine, handicraft and service delivery.