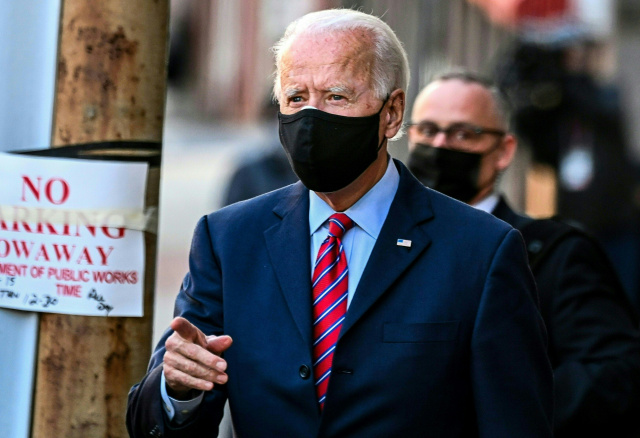 US President-elect Joe Biden leaves the Queen after meeting virtually with the United States Conference of Mayors in Wilmington, Delaware, on November 23, 2020. US President-elect Joe Biden on Monday named the deeply experienced Antony Blinken for secretary of state, also nominating the first female head of intelligence and a czar for climate issues, with a promise to a return to expertise after the turbulent years of Donald Trump. (CHANDAN KHANNA / AFP)

(AFP) - US President-elect Joe Biden will name his first cabinet picks on Tuesday, his chief of staff said, even as Donald Trump clung to unsubstantiated claims of fraud despite growing dissent from within his own party.

Biden has pushed ahead with preparations to assume the presidency on January 20, regardless of Trump's bid to undo the results of the November vote.

"You are going to see the first of the president-elect's cabinet picks on Tuesday," Biden's chief of staff, Ron Klain, told ABC's "This Week" on Sunday.

Several US news organizations, including Bloomberg and The New York Times, reported that the president-elect will nominate seasoned diplomat and long-time aide Antony Blinken as secretary of state.

Biden also said last week he had already decided his pick for the key position of Treasury Secretary.

US media also widely reported he will name Linda Thomas-Greenfield, who served as assistant secretary of state for Africa under President Barack Obama, as his UN ambassador.

A growing number of Republicans have either recognized Biden's victory or at least urged the General Services Administration -- the usually low-profile agency that manages the federal bureaucracy -- to release federal funds for the Biden transition.

With Trump refusing to acknowledge the election outcome, Biden and his top aides have been denied briefings on sensitive domestic and foreign policy issues -- most urgently the coronavirus pandemic battering the country.

Former New Jersey governor Chris Christie, who in 2016 advised the Trump transition, said on ABC that the president's legal team was a "national embarrassment."

Maryland Governor Larry Hogan, another prominent Republican, told CNN that Trump was making the country look like a "banana republic," later tweeting the president should "stop golfing and concede."

Trump has golfed on every weekend day since the election, though he took part virtually in the conference of the G20 leading economies this weekend -- skipping a Saturday session on the pandemic.

And even Representative Devin Nunes, an ardent Trump loyalist, conceded backhandedly on Fox News that Biden had "run a successful campaign from a basement."

Trump again tweeted on Sunday about "massive numbers of fraudulent ballots," a claim dismissed by a long list of judges in several states.

Appearances by Trump's personal lawyer Rudy Giuliani have drawn mockery, as have claims by another former member of his legal team, Sidney Powell.

Powell has alleged baseless conspiracy theories involving a possible hack of the election, earning her widespread derision but also praise from some of Trump's most ardent supporters.

Giuliani announced Sunday that Powell had been dropped from the team.

Pennsylvania was a must-win state, and flipped to Biden after backing Trump in 2016.

Brann's ruling paved the way for Pennsylvania to certify Biden's victory in the state.

Biden won the state-by-state Electoral College votes that ultimately decide who takes the White House by 306 to 232.

The Electoral College is due to formally vote on December 14, with state certifications to take place beforehand.

But Trump's refusal to concede has raised concerns that he could cause long-term damage to public trust in the voting system that underlies US democracy.

The judgment in Pennsylvania came hours after Republicans also requested a delay in certification in Michigan, another battleground state won by Biden.

They requested a two-week delay to allow a full audit of results in Wayne County -- home to majority-black Detroit, which overwhelmingly voted for Biden.

Michigan's board of canvassers, which includes two Democrats and two Republicans, is due to meet Monday to certify the results.

There were reports that a Republican member of the board was considering voting against certification.

Biden has so far moderated his criticism of Trump's actions, though he has spoken of "incredibly damaging messages being sent to the rest of the world about how democracy functions."