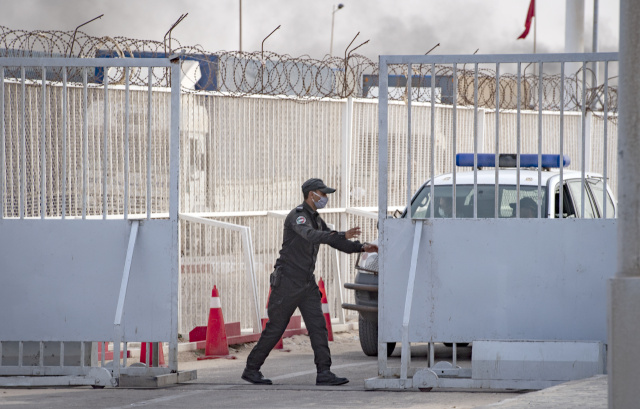 A Moroccan soldier is pictured at a border crossing point between Morocco and Mauritania in Guerguerat located in the Western Sahara, on November 24, 2020, after the intervention of the royal Moroccan armed forces in the area. Morocco in early November accused the Polisario Front of blocking the key highway for trade with the rest of Africa, and launched a military operation to reopen it. (Fadel SENNA / AFP)

(AFP) - Morocco has cleared access to the Guerguerat border post, reinforcing positions it took this month to protect the only road leading from Western Sahara to Mauritania, AFP correspondents said Tuesday.

The kingdom in early November accused the pro-independence Polisario Front movement of blocking the key highway for trade with the rest of Africa.

It launched a military operation to reopen it before deploying heavy machinery in the buffer zone at Guerguerat along the sandy track that leads to the frontier.

The route has now been cleared and reduced to a number of interlacing tracks on its last stretch with smoke billowing from debris piled nearby, the AFP correspondents said.

Morocco retains its military positions on the ground.

That is in line with King Mohamed VI's orders to secure the area, ensure the flow of traffic and stop any Polisario incursions, a senior government official told AFP in Rabat.

Morocco says Western Sahara is an integral part of its kingdom and has offered autonomy for the disputed territory, but insists it will retain sovereignty.

But the former Spanish colony has been contested for decades by the Polisario, which declared Western Sahara the Sahrawi Arab Democratic Republic (SADR) in 1976.

The Algerian-backed independence movement says the road was built in violation of a 1991 ceasefire deal.

On November 13, Morocco deployed its armed forces to drive away a group of Sahrawi independence activists who had blocked the route for three weeks, with the support of four armoured vehicles.

In response, the Polisario Front broke the 30-year-old ceasefire signed under UN auspices.

Since then, there have been occasional exchanges of fire between the two sides along the 2,700 kilometre (1,700-mile) sand wall erected by the Moroccans.

The Polisario regularly announces "significant losses" on the Moroccan side.

The United Nations, which has reported no casualties, has been trying to return to the status quo to restart a political process.

In recent days, pro-Polisario activists have tried to protest in some neighbourhoods of Laayoune, in the north of the Moroccan-controlled area, but have clashed with police, according to the Moroccan Human Rights Association.

The Moroccan authorities have refused to comment on such incidents, without denying them.

On Tuesday, a group of Sahrawis in traditional dress demonstrated at Guerguerat, in the far south, shouting "Our Sahara, our king".

Several local officials and tribal chiefs had shown their support for Rabat's position in recent days.

Africa » Be a reporter: Write and send your article » Subscribe for news alert
Tags: WSahara, Morocco