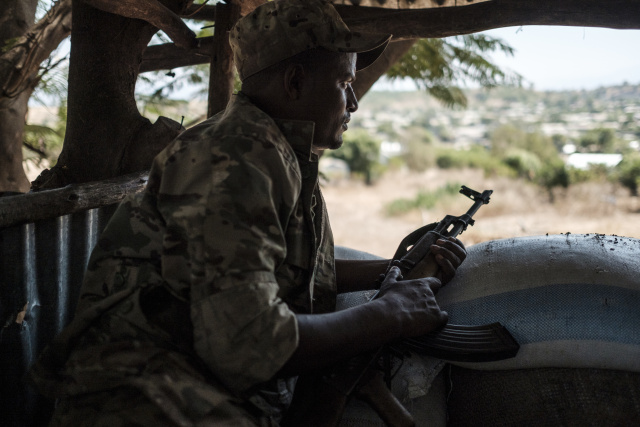 A member of the Amhara Special Forces keeps guard at the 5th Battalion of the Northern Command of the Ethiopian Army in Dansha, Ethiopia, on November 25, 2020. (EDUARDO SOTERAS / AFP)

(AFP) - Prime Minister Abiy Ahmed on Thursday ordered Ethiopia's army to launch a final offensive against Tigray's leaders in their regional capital Mekele, saying the window for their surrender had expired.

"The Ethiopian National Defence Forces have now been directed to conclude the third and final phase of our rule of law operations," Abiy said in a statement on Twitter.

"In this final phase, great care will be given to protect innocent civilians from harm. All efforts will be made to ensure that the city of Mekele, which was built through the hard work of our people, will not be severely damaged."

Abiy, the winner of last year's Nobel Prize, late Sunday gave the Tigray People's Liberation Front (TPLF) 72 hours to surrender -- an ultimatum rejected by the leader of the dissident northern region, whose forces have been fighting Ethiopian troops for three weeks.

Ethiopia's army said it was encircling the city with tanks ahead of an assault on the TPLF. Rights groups have warned that attacking the city could violate international law.

Abiy called on Mekele's half a million inhabitants to "stay at home and stay away from military targets, and take all necessary precautions", and urged them to hand over TPLF forces in their midst.

"We would like to assure you that our National Defence Forces have carefully devised a strategy to bring the TPLF criminal clique to justice, without harming innocent civilians, heritage sites, places of worship, development institutions and property," he said.