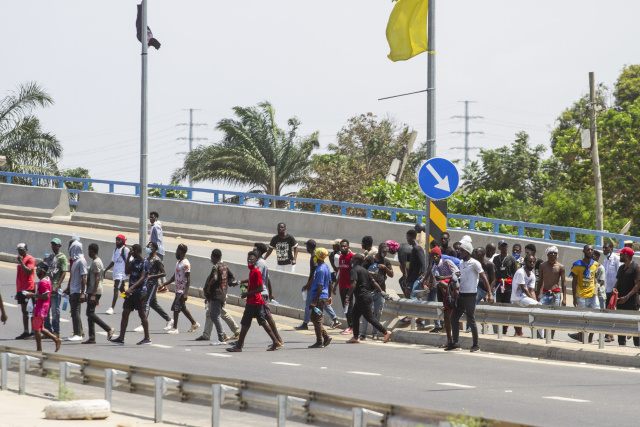 Protesters walk across a street during an anti-government demonstration on the day of independence in Luanda, Angola, on November 11, 2020. (Osvaldo Silva / AFP)

(AFP) - Angola's President Joao Lourenco held talks on Thursday with representatives of various youth organisations in an apparent bid to pacify restive youths after a wave of protests against his government.

Leaders from 17 students and youth groups, including from the largest opposition party UNITA, attended the meeting held at a conference centre in the capital Luanda and broadcast live on state television.

The meeting came after police and soldiers brutally cracked down on a surge of anti-government demonstrations that have rocked Africa's second largest oil producing nation in recent months.

The UNITA-backed protests in Luanda have been against unemployment, the high cost of living and alleged state corruption, among other reasons.

Lourenco said that while "demonstrating is a right protected by the constitution," that right is temporarily restricted by the measures imposed to curb the spread of the coronavirus.

He also said that "demonstrations must not end in violence".

At least 100 people were arrested in connection with protests held last month.

Seventy-one of them were later handed a one-month jail sentence converted into a fine of $70 for "civil disobedience". The rest were acquitted.

Lourenco, who took over from longtime leader Jose Eduardo dos Santos in 2017, told the youth leaders that "I also want a better Angola".

The protesters have also been demanding a new date for local elections delayed by the pandemic.

Lourenco promised the "elections will come when everything is ready".