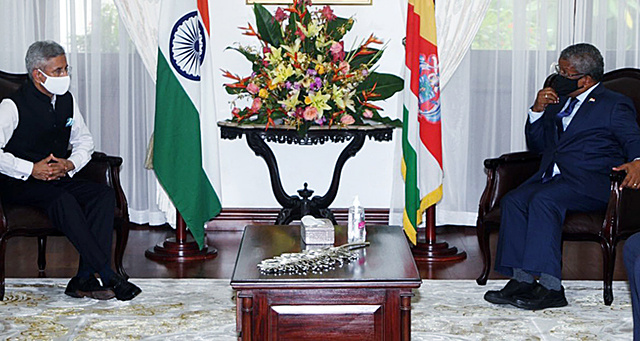 The invitation came during a meeting between the two at Statehouse, a meeting also attended by Sylvestre Radegonde, the Minister of Foreign Affairs and Tourism. (ANI)

(Seychelles News Agency) - President Wavel Ramkalawan of Seychelles on Friday was invited on an official visit to India next year by the Minister for External Affairs of India, Subrahmanyam Jaishankar, during his two-day official visit to the island nation.

The invitation came during a meeting between the two at Statehouse, a meeting also attended by Sylvestre Radegonde, the Minister of Foreign Affairs and Tourism.

Radegonde told the press that the External Affairs Minister also, on behalf of his government and Prime Minister Narendra Modi, congratulated Ramkalawan as the newly elected President.

As both countries share the Indian Ocean, the issue of maritime security was the main topic of discussion between the delegations. Radegonde added that investments in the island nation tourism sector by Indian nationals were also discussed.

"We discussed how we should look at enticing, encouraging Indian investors to come to Seychelles. How we can promote tourism in India. India is a vast country, people travel in the millions every year, how we could get them to put Seychelles at the top of their consideration as a tourist destination," said Minister Radegonde.

According to the minister many Indians travel to the Maldives instead of Seychelles, as a result of better air connectivity between India and the Maldives. Radegonde added that currently there is no Indian owned or managed tourism establishment on the islands.  The Seychelles Minister added that "the priorities of that the new government wants to push forward and avenues for further strengthening of the India-Seychelles bilateral relations were also discussed."

Challenges with drug trafficking and illicit fisheries were also discussed and Seychelles' Minister said that on a regional context the delegations discussed how to cooperate and tackle these challenges.

The Indian External Affairs Minister -is on an official visit to three countries. Before Seychelles, Jaishankar visited Bahrain and the United Arabs Emirates.

Seychelles, an archipelago in the western Indian Ocean, is benefitting from several construction-related projects paid for by the Indian government. These include the building of a police headquarters, an Attorney General's office, a government house, an international convention centre and a completed Magistrate's Court among others.

The Indian delegation will leave Seychelles on Saturday, November 28. Seychelles and India established diplomatic relations in 1976, right after the island nation gained its independence from the British.