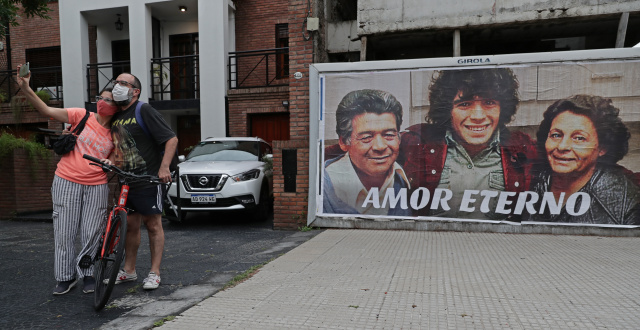 A couple takes a selfie with a poster showing a picture of late Argentine football legend Diego Armando Maradona (C) next to his father, Don Diego Maradona (L) and his mother Dalma Franco, reading " Eternal love" in Buenos Aires city, on November 28, 2020. Argentine football legend Diego Maradona -who died of a heart attack on the eve, at the age of 60- will be laid to rest where his parents have been buried. (ALEJANDRO PAGNI / AFP)

(AFP) - On the first weekend of sporting action since the death of Diego Maradona, sports, leagues and teams round the world on Saturday paid tribute to the Argentine football great.

Those who knew or had played with or against Maradona, who died aged 60 on Wednesday, added poignant emotion to the commemorations often held in stadiums without fans.

In Valencia, former Argentina and Sevilla team-mate Diego Simeone, clapped during the minute's silence before his Atletico Madrid team won in the empty Mestalla.

In Liverpool, Everton manager Carlo Ancelotti, who faced Maradona in Serie A, teared up as the players clapped. Even without fans to spoil a silence the Premier League has opted for a minute's applause instead.

"He was my opponent and he became my friend," Ancelotti said on Friday.

Saturday's tributes started on a rugby pitch in Newcastle, Australia, where New Zealand rugby captain Sam Cane laid an All Blacks jersey emblazoned with Maradona's name and shirt number, 10, in the centre circle ahead of the kick-off of the Tri-Nations international against Argentina.

The All Blacks then thrashed the Pumas.

"I think he is a legend to everyone, but in Argentina he was almost a god," said Puma coach Mario Ledesma.

In Italy, Germany, Spain, France and the Netherlands there was a minute's silence before kick-off.

In Italy, where the players wore black armbands, an image of Maradona appeared on the giant screens during the minute of silence before kick-off.

When his imaged appeared again on stadium screens in the 10th minutes, Serie A games stopped as players stood and clapped for 60 seconds.

In England, Sergio Aguero was not involved for Manchester City in their 5-0 thrashing of Burnley, but Pep Guardiola confirmed that was due to a small injury problem rather than the Argentine striker's close family connection to Maradona.

Aguero was previously married to and had a child with Maradona's daughter Gianinna.

Aguero posted a video of that tribute on Twitter with emojis of a heart and praying hands.

In 1986 Maradona scored twice to eliminate England in the World Cup. The first goal is known as the "Hand of God" and the second was FIFA's Goal of the Century.

During the minute's applause in Manchester, City played Maradona's second goal against England in Mexico on the big screens. On Friday the BBC rebroadcast the entire match.

In France, players walked out to a recording of Maradona singing "La Mano de Dios" from Emir Kusturica's biographical film about the player. The French league also invited the players to form the letter "M" in the centre circle during the minute's silence.

Maradona produced a rare moment of harmony between Paris Saint-Germain and Marseille as both clubs hung banners saying "Adios".

At the Parc des Princes, the Argentine ambassador to France, Leonardo Constantino unfurled the national flag from the stadium roof.

Barcelona manager Ronald Koeman had said the best tribute" was to "show what we can do on the pitch", and after Marseille's Argentine striker Dario Benedetto scored his first goal of the season in the win over Nantes, he celebrated by raising all 10 fingers.

In Huesca, the Sevilla team took the field wearing reproduction shirts from the season Maradona played with the club, all bearing his No.10 for the minute's commemoration as a tango, 'Mi Buenos Aires querido' played.

Maradona's other Spanish club, Barcelona, do not play until Sunday but in his press conference on Saturday, Koeman who faced Maradona once, during the Argentine's season in Sevilla said he was proud he "had the chance to play against him."