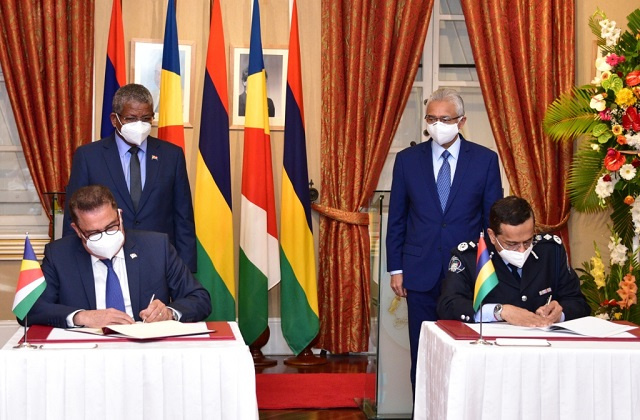 The first MOU on security and crime combatting was signed by Sylvestre Radegonde, the Minister of Foreign Affairs and Tourism and the Commissioner of Police of Mauritius, Khemraj Servansin. (State House)

(Seychelles News Agency) - Seychelles and Mauritius on Monday signed two agreements during the state visit of President Wavel Ramkalawan in the fields of security and combatting crime, as well as information and communication technology.

Ramkalawan is on a three-day visit to Mauritius at the invitation of Prime Minister Pravind Kumar Jugnauth. This is his first state visit since he was sworn in to office on October 26 as the fifth president of Seychelles.

The first memorandum of understanding (MOU) on security and crime combatting between the Mauritius police force and the Seychelles police was signed by Sylvestre Radegonde, the Minister of Foreign Affairs and Tourism and the Commissioner of Police of Mauritius, Khemraj Servansin. The MOU will provide a broad framework and mechanisms for cooperation on matters of mutual interest in relation to security and combatting crime.

The second MOU on information and communication technology was once again signed by Radegonde and Deepak Balgobin, the Mauritian Minister of Information Technology, Communication and Innovation. The MOU seeks to allow cooperation between the two countries through the sharing of information, capacity building as well as collaboration in cybercrimes among others.

In a statement at the signing ceremony, Ramkalawan said that "the two MOUs that have been signed this morning are of utmost importance. There is already a good collaboration between our police forces and this MOU will further enhance this development. As we speak we have a senior police officer who is collecting results of work that has been done by the Mauritius police in forensics."

On his side, the Mauritian Prime Minister said "the government and the people of the Republic of Mauritius feel honoured and privilege that his Excellency has chosen Mauritius for his first state visit, following his assumption of office. As many of you are aware Mauritius is not unfamiliar to President Ramkalawan; in the 80s he studied at the theological college."

He added that the visit of Ramkalawan "is testimony to the strong bond that exists between Mauritius and Seychelles. Our two countries not only share a vast ocean but we also have vibrant people to people ties resulting from common history, language, and culture.  More importantly, we have the same vision for the prosperity of the Indian Ocean."

Jugnauth said that Seychelles remains a key ally of Mauritius for regional integration and that the two countries will continue to collaborate closely at the international level.

This was echoed by Ramkalawan who said that "be it at the African Union level, SADC, the commonwealth and also at the UN, our two countries have definitely made this pledge that we will stand by each other and present a common front when addressing the various issues."

He added that that as promised Seychelles will "support the cause of Mauritius in claiming Diego Garcia as part of your territory, in supporting Mauritius in its bid for at the UN to become a member of the Security Council. We will also support Mauritius at the AU where you are presenting two persons to stand as commissioners."

Aside from the signing of the MOUs, the two leaders held bilateral discussions on several other areas which include trade and investment, defence and security, fisheries, arts and culture, tourism and sports and also new avenues of cooperation.

The Mauritian Prime Minister said the two countries also "noted that the COVID-19 pandemic has highlighted the need for us to strengthen our trade relations with a view to addressing food security."

Both leaders agreed that the socio-economic development of the two countries can only be sustainable if the region is strong.

The delegation of Seychelles, an archipelago in the western Indian Ocean, will return on December 2.

Christians in Seychelles prepare to celebrate a 'not-normal' Christmas