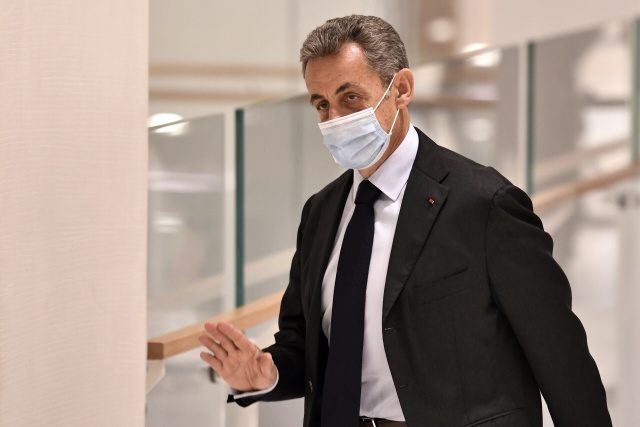 Former French president Nicolas Sarkozy (C) arrives for a hearing of his trial on corruption charges at Paris' courthouse on November 30, 2020.
Prosecutors say Sarkozy promised the judge a plush job in Monaco in exchange for inside information on a separate inquiry into claims he had accepted illicit payments from L'Oreal heiress Liliane Bettencourt during his 2007 presidential campaign. Though he is not the first modern French head of state in the dock, Sarkozy is the first to face corruption charges. (STEPHANE DE SAKUTIN / AFP)

(AFP) - Former French president Nicolas Sarkozy complained Monday of being the victim of six years of "slander", in his first remarks to the court at his landmark corruption trial.

Sarkozy became France's first modern head of state to appear in the dock last week, going on trial on charges of corruption and influence peddling.

The 65-year-old right-winger, who also faces trials in two other investigations, is accused of offering judge Gilbert Azibert a plum retirement job in exchange for inside information on an inquiry into his campaign finances.

"I don't accept any of the slander that has been levelled at me over the past six years," France's leader from 2007 to 2012 told the criminal court in Paris.

He risks a sentence of up to 10 years and a fine of one million euros ($1.2 million) if convicted.

Azibert and Sarkozy's lawyer Thierry Herzog are also on trial.

Sarkozy has been battling a barrage of investigations since losing his immunity from prosecution after his failed 2012 re-election campaign.

The hearings in his first trial opened on Monday after the court threw out a request by Azibert's lawyers to have it postponed for medical reasons.

His defence argued the 73-year-old had health problems that made public appearances risky during the Covid-19 outbreak.

But a medical exam ordered by the court determined he was fit enough to attend his trial.

Prosecutors say Sarkozy and Herzog tried to bribe Azibert with a job in Monaco, in return for information on an inquiry into claims Sarkozy received illicit payments from late L'Oreal heiress Liliane Bettencourt during his 2007 presidential campaign.

Wiretaps of conversations between Herzog and Sarkozy -- who used a secret phone bought under the alias of "Paul Bismuth" -- purportedly reveal the two men making plans to get Azibert to help sway the inquiry.

Azibert was a senior advisor at France's highest appeals court at the time. He never got the job in Monaco.

Sarkozy, meanwhile, was cleared of any wrongdoing in the Bettencourt affair.

But investigators are still probing allegations that he received millions of euros in funding from Libyan dictator Moamer Kadhafi towards his 2007 election campaign, and he is also accused of fraudulently overspending on the 2012 race.

Only one other French president, Sarkozy's political mentor Jacques Chirac, has been  put on trial after leaving office, though he was excused from having to attend his 2011 corruption trial due to ill health.

He received a two-year suspended sentence over the creation of ghost jobs at Paris town hall that were used to fund his party when he was the city's mayor.

General » Be a reporter: Write and send your article » Subscribe for news alert
Tags: France, Sarkozy