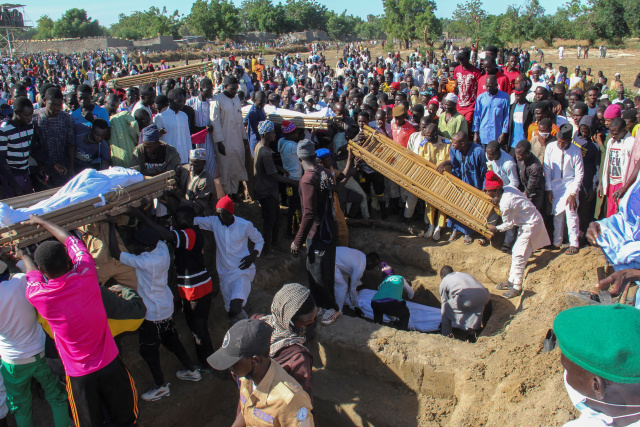 Mourners attend the funeral of 43 farm workers in Zabarmari, about 20km from Maiduguri, Nigeria, on November 29, 2020 after they were killed by Boko Haram fighters in rice fields near the village of Koshobe on November 28, 2020. The assailants tied up the agricultural workers and slit their throats in the village of Koshobe.
The victims were labourers from Sokoto state in northwest Nigeria, roughly 1,000 kilometres (600 miles) away, who had travelled to the northeast to find work. (Audu Marte / AFP)

(AFP) - Some 3,000 people began returning to their homes and deserted farms in the northeast Nigerian state of Borno on Monday, six years after fleeing jihadist violence and despite a weekend massacre that underscored the security risks they still face.

And adding to their troubles, officials there warned of a looming food crisis, caused at least in part by the deadly attacks on farm workers.

They boarded dozens of trucks and buses at their camp in the state capital Maiduguri to travel some 130 kilometres (80 miles) to their home area of Marte, once considered the breadbasket of the Lake Chad region.

"I'm very happy to return to my roots which I left six years ago," returnee Bukar Kyarimi told AFP. "We need to go back and tend our abandoned farms but we hope the government will give us adequate protection from the insurgents."

"We are eager to go back to our homes but what happened in Koshobe... is frightening," said another returnee.

The operation came after an attack Saturday on the village of Koshobe and nearby communities killed dozens of farm workers in one of the deadliest assaults this year blamed on Islamist militants.

The precise death toll of the massacre was unclear, but 43 victims of the attack were laid to rest on Sunday in a mass burial attended by Borno state Governor Babaganan Umara Zulum, who said at least 70 people perished in the massacre.

Both the IS-affiliated Islamic State West Africa Province (ISWAP) and the rival group Boko Haram have been blamed for increasing attacks on civilians they accuse of spying for the army and pro-government militia.

Saturday's massacre was "unfortunately one of too many such attacks targeting farmers, fishermen and families who are trying to recover some livelihood opportunity after over a decade of conflict," the UN humanitarian coordinator in Nigeria, Edward Kallon, said in a statement.

"Helping them to farm land and rebuild livelihoods are amongst our priorities and the only way to avoid the looming food crisis in Borno state," he added.

Monday's return was of a first batch of IDPs from Marte, the National Emergency Management Agency (NEMA) said in a statement.

Governor Zulum pledged to return all of some two million IDPs to their homes, despite concern from aid agencies for their safety.

He said it was no longer financially viable to house people in camps protected by soldiers and totally reliant on food handouts from humanitarian groups.

But the head of the Wal-Wanne Group, which employed many of the farm workers killed Saturday, warned at a news conference: "We may be facing a severe food security crisis due to the destructive activities of bandits who are not only destroying farms but also killing farmers."

Nigeria officially went into recession last week for the second time in four years, and the northeast region may see a worse food security situation next year than the near famine it suffered in 2016.

In the last two years, residents were returned to five major towns where they are confined under military protection, with trenches dug around the towns to fend off attacks by the jihadists.

Despite the security measures, the insurgents have continued to launch attacks on the fortified towns.

At least 36,000 people have been killed in the jihadist conflict since 2009 and violence has spread into neighbouring Niger, Chad and Cameroon, prompting a regional military coalition.

ISWAP, which split from Boko Haram in 2016, has camps on islands in Lake Chad -- where Nigeria, Niger, Cameroon and Chad meet -- and the area is known to be the group's bastion.