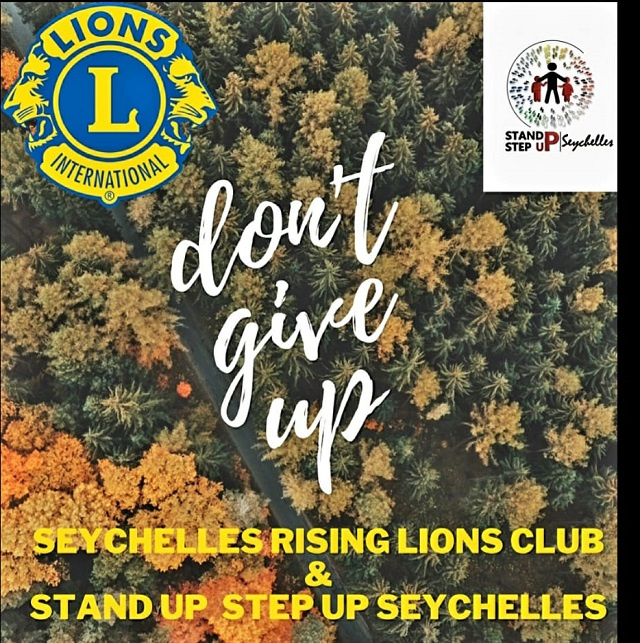 The e-booklet is part of their campaign to raise awareness of bullying. (Daniel Laurence, Seychelles News Agency)

(Seychelles News Agency) - A new e-booklet which highlights the works and experience of concerned citizens on bullying through poems and short stories was launched during the weekend.

Entitled 'Express Yourself,' the e-booklet was initiated by Stand Up Step Up Seychelles, a not-for-profit organisation in partnership with Seychelles Rising Lions Club as part of their campaign to raise awareness on bullying.

"The e-booklet contains stories and poems on the issue of bullying that is somehow touching to read. It shows the experience of people who have gone through bullying that we are not necessarily focusing on," said Trevor Louise, the chairperson of Stand Up Step Up Seychelles.

He said that bullying is worrying as it involves the mental health of the individual being bullied and that if not dealt with in time might lead to other problems.

An anti-social behavioural survey conducted by the Ministry of Health in 2016 in all state and private schools reported that in Seychelles "48 percent of children between the ages of 12 and 15 years have been victims of bullying."

This has led the Ministry of Education and Human Resource Development to develop an anti-bullying policy and strategy.

Louise hopes that by going through the 'Express Yourself' booklet, a person will understand the considerable impact of bullying on individuals, families and the community.

Around 11 participants contributed to the development of the E-booklet. Members of the public who want a copy can email Louise at standupsey@gmail.com.

Abinaya Pillay, 18, said that she wrote a small essay called "Home" related to racism, which she herself has experienced at a younger age.

"What I wrote was very personal for me. I hope it can also help other people who have gone through the same thing can relate to it," said Pillay.

She added that "it is easy for people to react to things that they do not understand, but if they take time to put themselves in the shoes of those being bullied they would understand how it feels like."

Pillay recounts her story as a person being of Indian descent and how she has been treated differently throughout her school years. She also wrote about her experience of seeing people close to her being bullied.

In the e-booklet, the chairperson of Seychelles Rising Lions Club, Deepak Babu, said that 'Express Yourself' is an amazing way to express the thoughts of various peoples from different age group.

"With the help of technology we aim to reach more and more people to spread the awareness against bullying and the effect it causes," said Babu.

The poems and short stories have been written in three languages including Creole, English and French.

General » Be a reporter: Write and send your article » Subscribe for news alert
Tags: Stand Up Step Up Seychelles, Seychelles Rising Lions Club