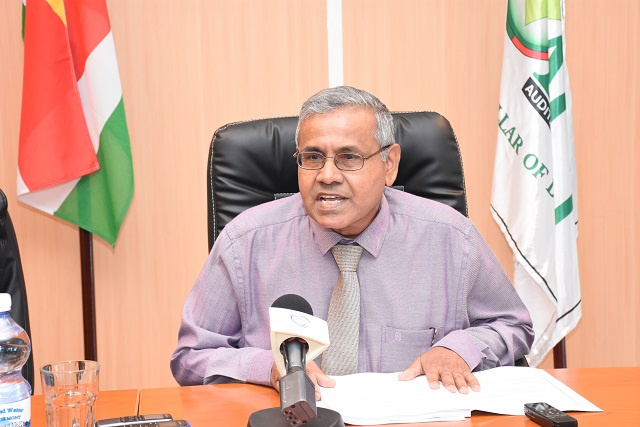 The money which was not collected by the Seychelles Revenue Commission and other sums due to government by five other state bodies will very likely not be collected due to the passage of time, Gamini Herath told journalists Wednesday at the launch of 2019. (Seychelles Nation)

Seychelles is losing out on $35 million of uncollected revenues as of 2018, a new report from the Auditor-General shows.
The money which was not collected by the Seychelles Revenue Commission and other sums due to government by five other state bodies will very likely not be collected due to the passage of time, Gamini Herath told journalists Wednesday at the launch of the 2019 report.
“Some of which may now be rendered irrecoverable due to passage of time and lack of action taken. In my view, the entities concerned should take immediate recovery action to collect as many debts as possible and reduce the amounts in arrears,” explained the auditor.
Herath pointed out the report does not include the results of numerous other audits such as performance audits and those carried out at the request of the Finance Public and Account Committee (FPAC) of Seychelles’ National Assembly.
“The results of these audits have been included in separate reports which were submitted to the National Assembly and, subsequently, to the government through the cabinet for information and remedial action,” said Herath.
The auditor noted with satisfaction that statutory bodies, including agencies, boards, councils and institutes, in Seychelles – 115 islands in the western Indian Ocean – are on track with legal provisions and are up to date with their annual accounts. The report also highlights ongoing noncompliance with prescribed financial rules, procurement procedures and lack of proper records.
The Chairperson of the board of Seychelles Revenue Commission, Chrystold Chetty, told SNA that despite tax being owned over several years, the commission is doing a lot to recuperate the tax money as well as identifying areas where tax collection is outstanding.
Chetty explained that the commission is adopting different mechanisms for enforcement. “We are calling and negotiating with tax agents, some we have filed court cases against them. As different amounts are owned for different tax, some of them are filing objections and renegotiating.”
Chetty added that in some cases, a write-off may be the only solution but for now the law does not make any provision for a write-off. In other instances, the chair explained that in future assets will be seized, to be sold off so that the money owed can be recuperated.
Currently, the revenue commission is collecting different taxes such as personal income tax, value-added tax as well as corporate tax.
According to Chetty as much effort is put in the matter, there are challenges that the commission has no control on, such as their court cases, where there is a bottleneck at the Attorney General's office – the prosecutors of the cases.  But despite this Chetty said all endeavours are being taken so that by 2022, the commission will recuperate some tax money in arrears.
General » Be a reporter: Write and send your article » Subscribe for news alert
Tags: Auditor General, Seychelles Revenue Commission, Finance Public and Account Committee, National Assembly