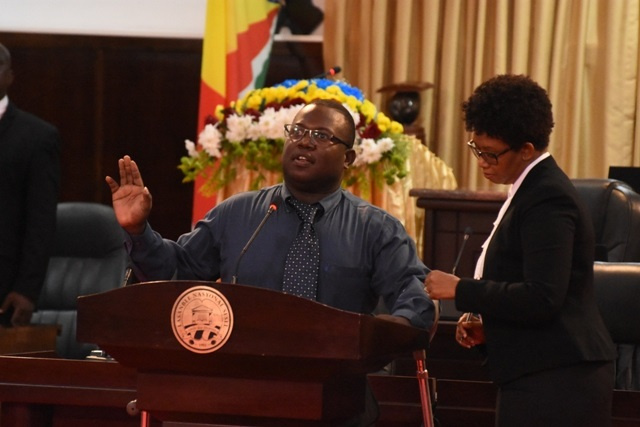 Zialor said taking his oath at the National Assembly was very emotional for him but his new role is one he is taking with a lot of humility. (Seychelles Nation)

(Seychelles News Agency) - The first Seychellois living with a disability to be sworn in to the National Assembly envisions an even more inclusive Seychelles that helps to improve the lives of those living with disabilities.

Naddy Zialor made history on October 29, when the seventh cohort of parliamentarians took office.

Zialor, a proportional member of the ruling party Linyon Demokratik Seselwa (LDS), has also been nominated as the ambassador for people with disabilities in the island nation.

“My specific objective is to advocate for the rights of persons living with disabilities but at the same time to see how best we can move the country forward ‒ improving laws and regulations on disability issues and national issues,” said Zialor.

The 32-year-old from the western Mahe district of Grand Anse was born with cerebral palsy, a group of disorders that affects movement and muscle tone.

Zialor told SNA that growing up as one of two children with disability was not easy. The parliamentarian recalled that walking to school with the aid of crutches took up to two hours.

“The journey involved stopping every now and then, to relax, talk to the neighbour, drink some water and that was a daily routine,” recalled Zialor, who thanked his mother who he said despite being a single mother gave her everything to her two special needs children.

Zialor said taking his oath at the National Assembly was very emotional for him but his new role is one he is taking with a lot of humility.

“I see myself playing two roles: one as a young person and the other as a less abled person. Too often we only speak about disability but we have not done anything concrete which will have a direct impact on the day to day lives of people with disabilities. But how we do that, it is through laws and things that bids the state,” explained Zialor.

The former employee of the Department of Employment said that from now on it will be his role to ensure that issues of the disabled are on the agenda across all legislations that goes through the parliament. “We must move from the state shall to the state must, and what am pushing for is a Disability Law,” said Zialor.

At an event held recently for people living with disability and where Zialor was given the responsibility of ambassador for the less abled, the president of Seychelles, Wavel Ramkalawan, congratulated Zialor for the work he is doing.

“When you look at Naddy we see someone who is able and gifted because when we listen to him speak, we can tell that he truly has a political mind,” said the Ramkalawan.

The president explained that well before the election he had told Zialor he will make sure that he will give him a seat in the Assembly as he will make an enormous contribution to Seychelles and be an ambassador for the disabled as he is well known and liked in the community.

Zialor said: “Seychelles needed a voice in the Assembly for people with disability, it is with LDS that I have been able to achieve this and break the glass ceiling. I have been in politics for many years and have always been vocal. After endorsing the President for the election, I put my bid in to become a proportional assembly member and after the party debated, they found that I was the best man for the job."

The parliamentarian added that “as a member of the National Assembly I will work to make sure that equal opportunities are accessible to people with disability.”

Zialor said that he wants to see a transformation in the Seychellois society, where there is inclusivity, where disabled students can attend normal school, graduate, get a certificate and join the world of work like everyone else.

“My vision is to see a Seychelles where an engineer when designing a pavement can look at it with the eye of a less abled person and where there is universal design,” concluded Zialor.