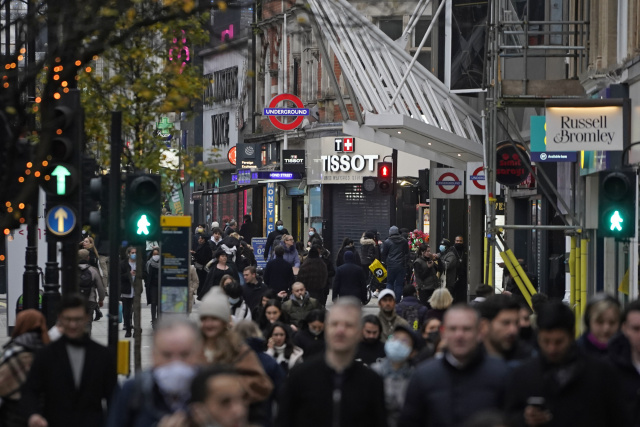 Shoppers and pedestrians are seen in London's main high-street shopping district on Oxford Street in London on December 2, 2020 as England emerges from a month-long lockdown to combat the spread of the novel coronavirus. England on December 2 exited a month-long lockdown into a new 3-tiered system of curbs with non-essential retail, leisure centres and salons all reopening but with some sectors, including hospitality, seeing tighter restrictions. (Niklas HALLE'N / AFP)

(AFP) - Britain on Wednesday became the first western country to approve a Covid-19 vaccine for general use, while Japan and Italy pledged free inoculations for all even as the global death toll rose towards 1.5 million.

The news came as the UN convenes a special two-day summit on the pandemic Thursday, with European leaders such as French President Emmanuel Macron and German Chancellor Angela Merkel to speak virtually on their countries' response to the global health crisis.

Notably absent will be populist heads of state like US President Donald Trump and Brazilian President Jair Bolsonaro, as well as Chinese President Xi Jinping, whose country was ground zero as the virus began its deadly crawl across the globe late last year.

Meanwhile US hospitalizations of Covid patients topped 100,000 for the first time Wednesday, according to the Covid Tracking Project, while daily deaths topped 2,700, the highest fatality rate since April.

The United States, which has suffered the highest virus toll with more than 270,000 deaths, reported that it hopes to have immunised 100 million people against Covid-19 by the end of February.

The UK's independent medicines regulator gave a green light to the BioNTech-Pfizer drug in double-quick time but insisted safety had come first.

"Everybody can be confident that no corners whatsoever have been cut," said Medicines and Healthcare products Regulatory Agency (MHRA) chief executive June Raine. "The public deserve nothing less."

Prime Minister Boris Johnson said the move heralded a vaccination programme "that will ultimately allow us to reclaim our lives and get the economy moving again".

His government said some 800,000 doses would be administered starting as soon as next week.

With over 59,000 deaths from 1.6 million cases, Britain's outbreak remains the deadliest in Europe.

The EU's medicines regulator insisted Wednesday it has the "most appropriate" method to approve a coronavirus vaccine, after British ministers claimed that leaving the bloc, and its rules, had allowed them to adopt the jab ahead of their European neighbours.

The European Medicines Agency (EMA) said it will hold a special meeting by December 29 at the latest to decide on whether to grant conditional approval for the Pfizer-BioNTech vaccine.

Meanwhile Mexico said it signed an agreement Wednesday with Pfizer to buy 34.4 million doses of vaccine, with a first batch due to arrive this month.

The cumulative total of Covid-19 cases surged by nearly 30 percent across the Americas in just one month, the Pan American Health Organization warned, releasing figures for November.

Canada is seeing worrying surges along with Brazil and Cuba.

Japan and Italy decided that vaccines, when approved, will be provided free to all residents.

As in Britain, Italy plans for medical staff and people in elderly care homes to be among the first vaccinated.

Merkel announced that cultural and sporting facilities in Germany as well as restaurants and bars will remain shut until January 10, extending shutdown measures to curb transmission of the coronavirus.

In Spain, Health Minister Salvador Illa announced that people will exceptionally be able to travel to visit family over Christmas but that such get-togethers must be restricted to 10 people at the most.

Close to 1.5 million people globally had died from the coronavirus as of 0200 GMT Thursday, according to an AFP count based on official sources, while more than 64 million have been infected.

"This authorisation is a goal we have been working toward since we first declared that science will win," he said.

US giant Pfizer and German newcomer BioNTech added that they expected further regulatory decisions from other countries in the coming days and weeks.

Other vaccines expected to come on stream soon include ones from Moderna and AstraZeneca/Oxford University, which has strong backing from the UK government.

Many poorer countries are pinning their hopes on the AstraZeneca/Oxford candidate, which can be kept in regular refrigerators and is being offered at cost price.

But it is undergoing further data analysis after questions were raised over the effectiveness of its dosage regime.

With effectiveness around 95 percent, both Pfizer-BioNTech and Moderna vaccines are based on new mRNA technology, which hacks into human cells to effectively turn them into vaccine-making factories.

On Wednesday Russian President Vladimir Putin, who will not attend the UN summit either, ordered "large-scale" vaccinations to start next week with the country's Sputnik V vaccine.

Over 100,000 people have already been vaccinated with Sputnik V, currently in the final stage of clinical trials involving some 40,000 volunteers.

Beyond the hoped-for jabs, researchers at the University of Pennsylvania and biotech firm Regeneron are working on a nasal spray that is designed to stop infection from the virus, initially testing the gene therapy on animals.