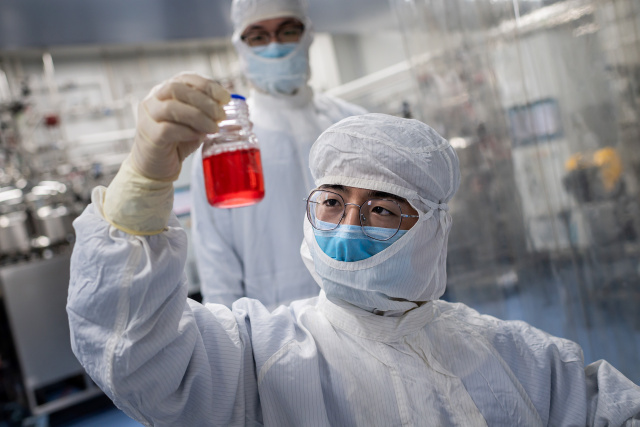 In this picture taken on April 29, 2020, an engineer looks at monkey kidney cells as he make a test on an experimental vaccine for the COVID-19 coronavirus inside the Cells Culture Room laboratory at the Sinovac Biotech facilities in Beijing. Sinovac Biotech, which is conducting one of the four clinical trials that have been authorised in China, has claimed great progress in its research and promising results among monkeys.
(NICOLAS ASFOURI / AFP)

(AFP) - The World Health Organization said it was considering introducing electronic vaccination certificates, as hopes for an end to the pandemic were boosted after Britain became the first country to approve use of a Covid-19 vaccine.

"We are looking very closely into the use of technology in this Covid-19 response and one of them is how can we work with members states towards something called an e-vaccination certificate," WHO Europe expert Siddhartha Datta told an online press briefing Thursday.

Introducing such a certificate, which would make it possible to identify and monitor people who have been vaccinated, has not been finalised and would have to be drawn up in accordance with national laws, Datta said.

It would not be an immunity passport, which is supposed to assure that its carrier is protected against the disease because they have been infected and recovered.

"We do not recommend immunity passports," said Catherine Smallwood, the WHO's senior emergency officer for Europe.

Tech-savvy Estonia earlier this year began testing an app that could serve as a kind of digital "immunity passport", allowing users with antibodies to show employers and others their reduced risk of spreading the coronavirus.

Britain on Wednesday became the first country to approve the Pfizer-BioNTech Covid-19 vaccine, and the European Medicines Agency is due to announce its decision on December 29 at the latest.

The WHO's Europe zone, which covers 53 countries including Russia, has recorded more than 19.3 million infections and more than 433,000 deaths since the start of the pandemic, according its data table, with 1.5 million cases recorded in the past seven days.

"Whilst we are seeing a slight decrease in the number of cases in western Europe, this does not mean the entire WHO European region faces an improvement in the epidemiological situation," said WHO Europe regional director Hans Kluge.

"The resurgence is moving eastward with the hardest-hit countries now in central and southern Europe," he said, calling on governments not to lower their guard in the fight against the pandemic.

In the event of a fall in cases, "consider scaling-up the public health infrastructure and preparing for the next surge," he said.

General » Be a reporter: Write and send your article » Subscribe for news alert
Tags: health, WHO