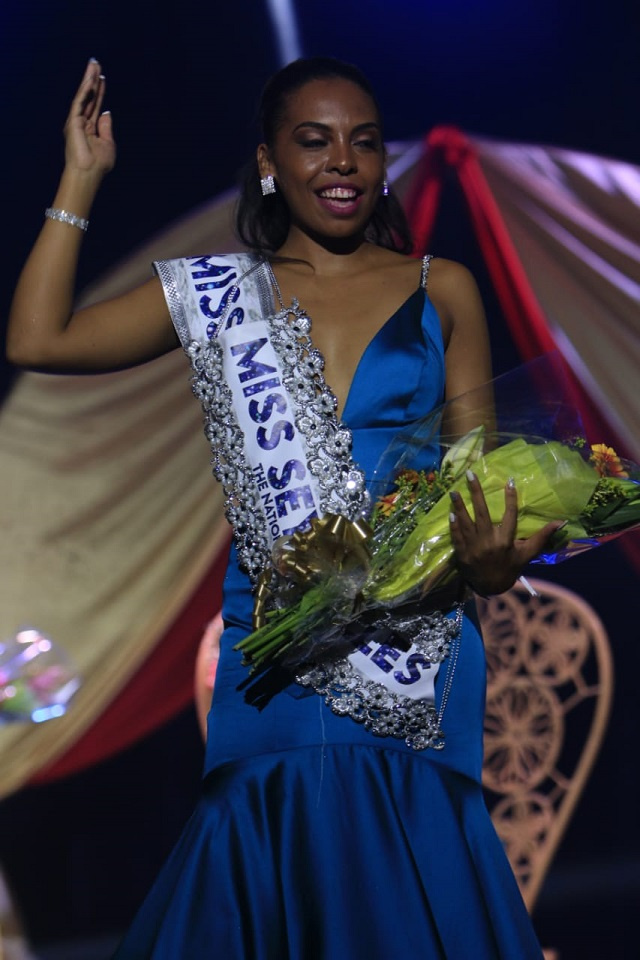 Anette, an economist with the Ministry of Finance, Economic Planning and Trade, won the title among 10 other contestants. (Joe Laurence, Seychelles News Agency)

(Seychelles News Agency) - Kelly-Mary Anette reacted with shock and disbelief as she walked down the stage Monday evening to receive her Miss Seychelles 2020 crown and sash.

Anette, an economist with the Ministry of Finance, Economic Planning and Trade, won the title among 10 other contestants, giving Seychelles a new beauty queen after a two-year hiatus.

"I feel really emotional and very happy. It wasn't an easy journey as it lasted for 11 months - the longest Miss Seychelles journey ever. I thank all the individuals who have helped me in a way or another. Without their support, I would not have been able to get the crown," Anette told reporters.

The 24-year-old also took home the 'Miss Talent' title, which was one of 10 awards up for grabs during the Miss Seychelles National Pageant at the International Conference Centre of Seychelles (ICCS). She will be the face of Mado, the main sponsor, for one year.

Hailing from the eastern district of Pointe Larue, Anette believes that losing her mother as a teenager taught her to be resilient as at age 14 she found herself a mother figure to her younger siblings.

Anette's own experience has led her to have a special consideration for orphans. Her project for the pageant is devoted to the psychological and emotional well-being of orphans and single parents, especially those whose loved ones have died.

"I have already created my foundation that will create focus groups for semi orphans so that they do not feel alone after the passing of their parents. We will cater to the psychological wellbeing and classes such as decision-making skills," explained Anette.

The results came after 11 months of training, leading to the pageant's grand finale. Organisers of the event – Beauty Empowerment Seychelles (BES) – said they are satisfied with the way Miss Seychelles National Pageant unfolded.

"We have worked really hard as a team to put together the pageant. We are also really satisfied with the results as from the start we have been saying that the results can go anywhere. All the girls who took part in the pageant had a chance to win the title. It was really difficult for the jury to choose a Miss Seychelles," said Kevin Perine, an executive member of BES.

The vice-chairperson of BES, Margaret Raguin, said that the team already has plans for Anette.

"There is already her project that we will need to take up starting this week. We also have other training to be conducted, to prepare her for an international pageant, hopefully, by the end of the year. We would like her to take part in Miss World but because of COVID and the uncertainties, we do not know if it will take place," said Raguin.

Talking about taking part in an international pageant, Anette said that "if I get the same team working with me, I'm going to do well. We are not going to participate in Miss World - we are going to compete."