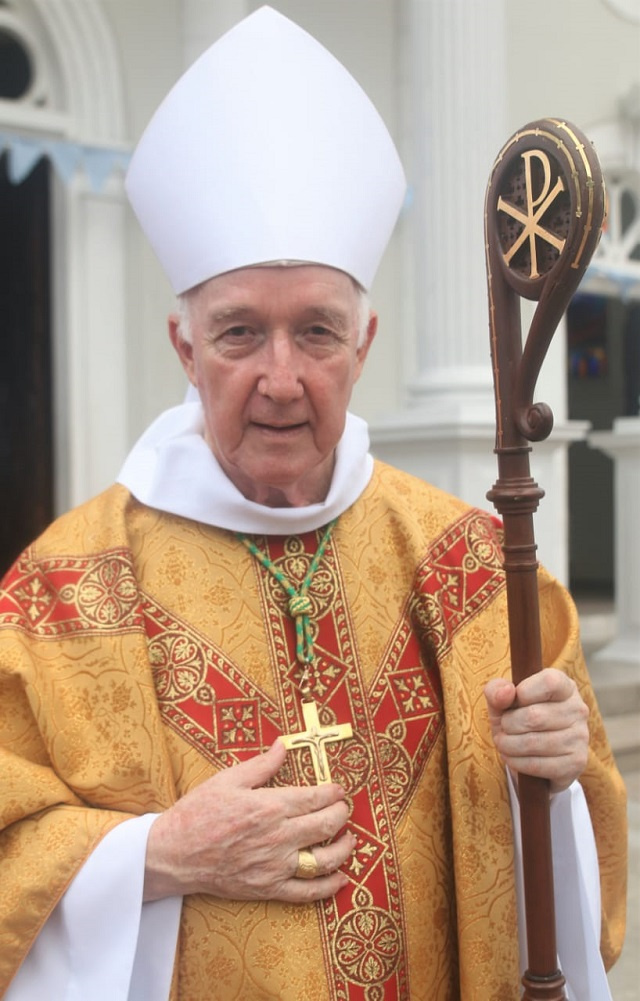 Alain Harel – a Mauritian national - becomes the tenth bishop to head the Roman Catholic Church of the island nation since its establishment on the island nation in 1852. (Joe Laurence, Seychelles News Agency)

(Seychelles News Agency) - The Roman Catholic Diocese of Port Victoria in Seychelles has a new bishop who says he wants to keep track of what residents of the island nation see as their values and challenges.

Harel, 70, took his new post on Tuesday during a special mass at the Immaculate Conception Cathedral in the capital city of Victoria. Before taking his post in Seychelles – 115 islands in the western Indian Ocean - Bishop Harel was the Apostolic Administrator of Rodrigues- an autonomous outer island of Mauritius.

Harel said his new mission will be under the motto “You are the salt of the earth and the light of the world.” The bishop said that he will ensure that the Catholic Church remains attentive to all aspects of the human life and that along with all local clergy will strive to bring the words of Jesus into people's daily lives.

“My ambition or wish is to, together with the church in Seychelles, build a road to remain attentive to all that constitutes the human life as God has put us here to grow with humanity,” Harel said in his first interview to SBC TV – the island nation’s main broadcaster.

According to the bishop, he will remain attentive to what the people of Seychelles are living. “Including values, their difficulties and challenges and within this context and this reality, try and live Jesus,” added Harel.

The mass to install the new bishop was celebrated by Harel himself. It was attended by members of the clergy of the diocese, including Cardinal  Maurice Piat from the Port Louis diocese. President Wavel Ramkalawan and First Lady Linda Ramkalawan, members of Cabinet and the National Assembly, as well as a large crowd of devotees, also participated in the event, which was also live on SBC TV.

During the ceremony, Harel also made his first nominations as the new head of the church. Eric Leon and Edwin Mathiot, both Seychellois priests, are now the new Vicar General and the Chancellor of the Diocese of Port Victoria, respectively.

In the island nation, the feast is marked by a procession of the statue of the Virgin Mary attended by thousands of faithful. There was no procession this year due to COVID-19.

Harel succeeds Bishop Denis Wiehe, who resigned from the post earlier this year. Wiehe was Bishop of Port Victoria since 2002.

Harel was born in June 1950 and comes from a family of five children. Later in life, some of his siblings also joined the clergy following in the footsteps of other relatives who also served the church.

Harel attended elementary school at the Lorette de Quatre-Bornes convent before joining the Collège du Saint-Esprit. At 20, Harel became a seminarian in Angers and Nantes in France where he studied philosophy and theology. His ordination as a priest took place in September 1978, in his native country.

During his 42 years of missionary, Harel served in many parishes and also held many positions such as director of the Centre for Vocations and Formation of Future Seminarians.

In 2002 he was named Titular Bishop of Forconio and apostolic vicar of Rodrigues, where he served until his nomination for mission work in Seychelles.

The Catholic faith was brought to Seychelles by the first settlers but was formally established in 1852 as the Apostolic Prefecture of Seychelles, which was promoted in August 1880 to Apostolic Vicariate of Seychelles. Twelve years later, on July 14, 1892, Pope Leo XIII elevated the Vicariate to the Diocese of Port Victoria

Marc Hudrisier who had been appointed Prefect Apostolic in 1890, became the first Bishop of Port Victoria. During that time there has been only one Seychellois bishop Felix Paul, who was the bishop from March 1975 to May 1994.