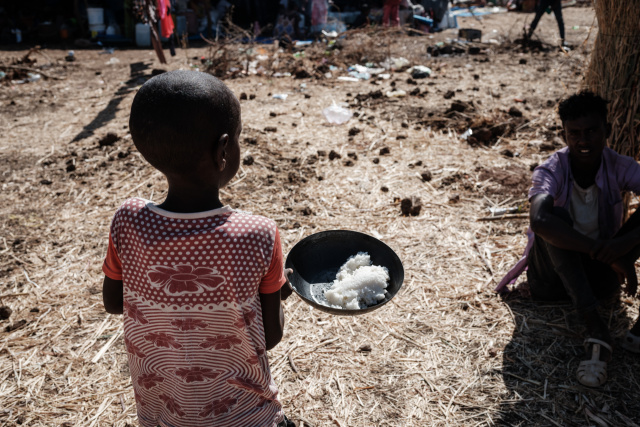 (AFP) - Ethiopia's government on Thursday said it had sent truckloads of wheat to Tigray, as a row over access continued to keep nearly all foreign aid agencies out of the northern region.

A convoy of 30 trucks arrived in the regional capital Mekele on Thursday, according to the state-affiliated Fana Broadcasting Corporate, and "preparations are underway to distribute the aid among residents."

The report emphasised that the aid "is being provided only by the Ethiopian government."

An agreement last week to allow the UN and aid agencies to access the region has foundered, sparking international alarm at the plight of civilians and refugees.

The government has bridled at suggestions that outsiders might play a leading role in assisting a population that suffered under nearly a month of conflict between federal and regional forces.

In a sign of the tensions over where and how aid agencies should operate in Tigray, a UN team was shot at by Ethiopian forces on Sunday and briefly detained, a government spokesman said this week.

He said the team ignored instructions and drove through checkpoints before being fired on. He blamed them for the incident, saying they had embarked on "a kind of adventurous expedition".

The move marked a dramatic escalation of tensions between Abiy and the TPLF, which dominated Ethiopian politics for nearly three decades before anti-government protests swept Abiy to office in 2018.

But access remains tightly constrained and a communications blackout is still largely in place, while the TPLF has vowed to fight on and skirmishes have continued.

The UN's rights chief on Wednesday voiced deep concern over the situation in Tigray, warning it was "spiralling out of control."

Michelle Bachelet said the conflict was having an "appalling impact on civilians" adding that "in the Tigray region itself, fighting is reportedly continuing, in spite of government claims to the contrary."

She also decried the "deeply distressing" obstacles to humanitarian relief efforts in Tigray.

In a sign of a possible detente, the UN said Wednesday it had reached a fresh agreement with Ethiopia on humanitarian access.

Secretary General Antonio Guterres said the deal will "make sure that there is full access to the whole of the territory and full capacity to start humanitarian operations based on real needs and without any kind of discrimination."

Thousands have been killed in fighting since the start of November, according to the International Crisis Group (ICG) think tank, while almost 50,000 have fled to Sudan.

Around 600,000 people living in Tigray depended on food handouts even before the fighting began.

Among them are an estimated 96,000 Eritrean refugees, many of whom fled neighbouring Eritrea's authoritarian government, and were living in four camps in Tigray.

The UN refugee agency (UNHCR) has been unable to reach the camps for over a month, fuelling concern over stocks of food and medicines.

General » Be a reporter: Write and send your article » Subscribe for news alert
Tags: Ethiopia, UN