WHO warns Christmas celebrations could turn to tears 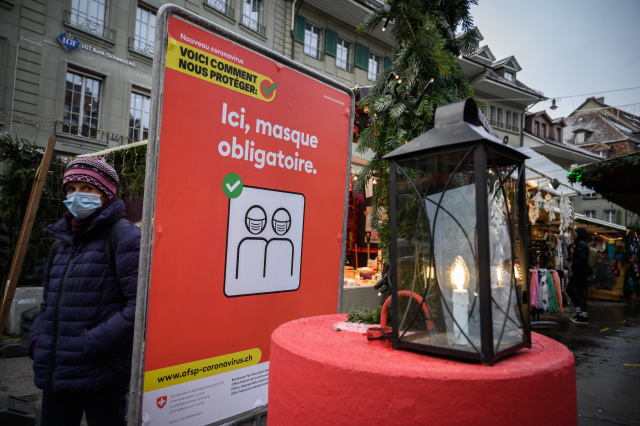 A woman wearing a disposable protective face mask walks past a placard reading in French "Here mask mandatory" next to the Christmas market in Bern, on December 11, 2020. Switzerland, which is failing to control the Covid-19 epidemic with the highest contamination rates in Europe, adopted a package of measures including the closure of restaurants, bars and shops at 7pm. (Fabrice COFFRINI / AFP)

(AFP) - The World Health Organization warned Friday that Christmas celebrations could turn to tears if people fail to keep up their guard against Covid-19 during the festive season.

WHO chief Tedros Adhanom Ghebreyesus said the number of deaths in the coronavirus pandemic was surging and urged people to think very carefully about their holiday season plans.

"The festive season is a time to relax and celebrate but... celebration can very quickly turn to sadness if we fail to take the right precautions," he told a news conference.

"As you prepare to celebrate over the coming weeks, please, please consider your plans carefully. If you live in an area with high transmission, please take every precaution to keep yourselves and others safe.

"That could be the best gift you could give -- the gift of health."

Tedros said there had been a 60 percent increase worldwide in deaths from the respiratory disease over the past six weeks.

However, some continents are witnessing bigger death toll surges than others, said Maria Van Kerkhove, the WHO's technical lead on Covid-19.

"This virus is still circulating. Most of the world remains at risk," she said.

Meanwhile Michael Ryan, the WHO's emergencies director, said the virus was yet to settle down into a predictable pattern.

"The situation globally is still very epidemiologically unstable," he said.

After Britain this week started rolling out public vaccinations against the new coronavirus, Tedros said the production of safe and effective jabs against a disease that was completely unknown a year ago was an "astounding scientific achievement".

He said that almost one billion doses of three vaccine candidates had been secured as part of the COVAX facility.

The WHO-led scheme for pooling risk and reward among countries rich and poor is a global attempt to speed up the development of Covid-19 vaccines, and purchase and distribute them evenly regardless of wealth.

Some 189 countries and economies are on board with the scheme, which aims to secure vaccines for 20 percent of the population in each country by the end of next year.

"Further deals will be announced in the near future," he said.

Looking forward to 2021, WHO senior advisor Bruce Aylward said there was light at the end of the "long tunnel".

"There is no reason for us to see the same epidemic next year because we know how to beat this disease," he said.

General » Be a reporter: Write and send your article » Subscribe for news alert
Tags: health, WHO, Christmas