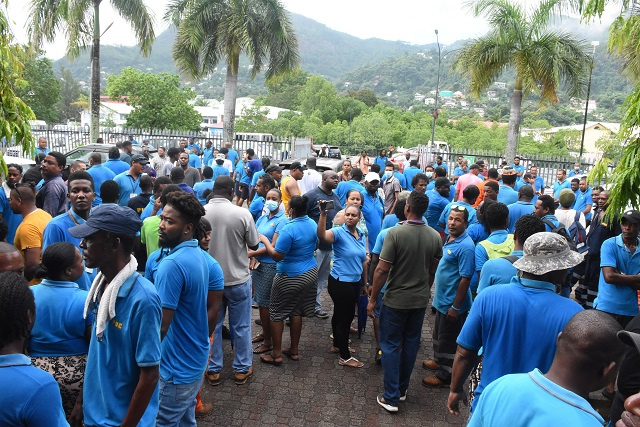 Staff were angered over a memo which was circulated on Wednesday. (Seychelles Nation)

(Seychelles News Agency) - Workers of the main utility company in Seychelles went on a brief strike on Thursday before returning to work after a compromise was met to reduce the impact of a smaller year-end bonus.

About 200  staff from the Public Utilities Corporation (PUC) gathered at the human resources office at Bois de Rose Avenue- on the outskirts of the capital city of Victoria - to demand what they said is due to them. They said they were unhappy to see a reduced bonus despite working all year, including when much of the country was on COVID-19 lockdown.

Staff were angered over a memo which was circulated on Wednesday. "The memo is saying that we will this year receive only 50 percent of our salary as a bonus. Furthermore, they said that we will also be appraised on the 50 percent, but at the end of the day we will take nothing home," an angry staff told SNA.

Another staff member said many are unhappy "because the managers especially the expatriates are enjoying all their perks and as they are already earning fat salaries, the 50 percent cut will not affect them as it will affect lower-paid staff."

The group said they understand the forfeiture of the 13th-month salary but feel their bonus should not be cut.

"We all know the situation of the country where there is a financial crisis, even for PUC, it is not an exception. Obviously, people cannot get the 100 percent however we are in a very difficult time, it is a crisis. But it is time to stop using lower-paid staff for statistics because when it is time to make decisions to benefit them, for them to bring something more to their family, we do not really look at them. Let us look at a flat rate where all of us will be happy," explained Zara Finesse, who was on the negotiating team.

The group maintained that a flat rate should apply across the board and said that it is them working 24 hours, seven days a week in the rain to keep the company going.

After grouping for more than one hour, a meeting was held between the representatives of the staff, board and management of PUC, representatives from the employment ministry and the workers union chaired by the Vice President.

"We have reached what we think is a solution and it is a compromise," Afif told the group after the meeting ended.

"The compromise is as follows. There is a sum of money available which was going to be used to pay for the bonus. PUC had proposed a system which most of you were not satisfied with, as some would have earned less and others more. In principle, we have agreed those that would have earned more, will sacrifice and come down on a reasonable sum, and those who earn less will now earn more. We will use the money already budgeted. The sum will be divided equally and all staff will earn SR5800 ($274)," he explained.

Afif noted that this is a special arrangement which will stand for this year only and next year, PUC will go back to its normal procedures where the bonus is concerned.

Joubert added that they are fairly satisfied and the group has agreed to stop striking and go back to work.

The chief executive of PUC, Philippe Morin said the management is happy as long as the staff is happy with what is being offered. Morin noted that it would be difficult to pay more.

"The current economic circumstances in the country is difficult and PUC's financial situation is not as it was before. PUC is selling much less electricity to the tourism sector, this is the area where we were making profits and this has decreased, and this has decreased our profits," said Morin.

However, not all staff is happy with the new arrangement as they feel the bonus is much less to what they think they deserved.

PUC is a public corporation established in 1986 to manage and operate the electrical, water and sewage services in Seychelles – 115 islands in the western Indian Ocean. It currently employs around 1,200 staff.