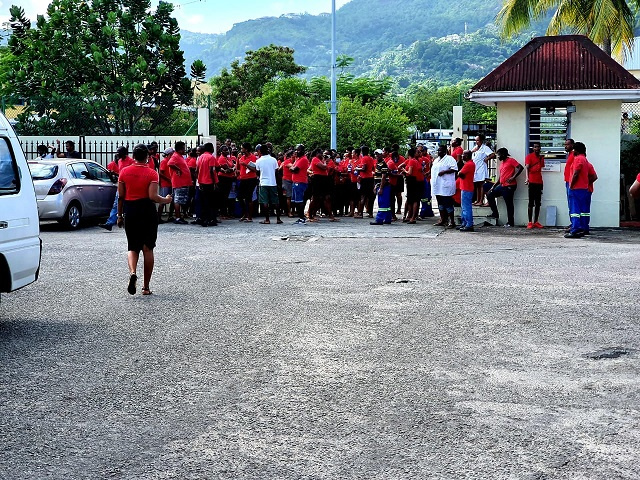 Staff protested because they were not going to get a year bonus although they worked tirelessly even during the period of COVID-19. (Daniel Laurence, Seychelles News Agency)

(Seychelles News Agency) - For a second consecutive day, workers briefly went on strike on Friday, this time from the Seychelles Trading Company (STC) after they were told they will not receive an end-of-year bonus.

The Minister of Finance, Naadir Hassan, met with workers and the management of STC and the decision taken was that workers will be paid SCR 5,000 ($236) as a bonus.

Hassan said that the payment will be a one-off and next year the bonus will be reviewed according to the performance of the company.

Speaking to SNA, an angry staff of STC, who was representing others at the protest, said: "We are protesting because the management of the company told us that we will not get our end of year bonus although we have worked tirelessly even during the period of COVID-19."

"People were buying like crazy during the lockdown. They cannot tell us that the company has not collected enough to give us our annual bonus," added the staff member, who declined to be named.

According to the staff, in all meetings with the management, "we were told that the company has no money to pay us our bonus. There are parents receiving only SCR 6,000 ($283) per month. And this is nothing for us as the cost of living keeps going up."

The Minister of Finance said: "We all know that the country is going through tough economic times. Perhaps it is under this notion that STC took the decision as they saw that they would not be able to sustain it. The company is running at a loss. However we have listened to the concern of the workers."

STC's business model operates in a way that it sells goods to also subsidise essential goods which is not sold at a profit. But due to the pandemic sales of goods have dropped in general and less revenue is collected to be able to subsidise.

The chief executive of STC, Christine Joubert, said that the company is running at a deficit, but since the government is a shareholder, an agreement was reached.

"However, this decision would definitely have an impact on us, but if we work hard, I think we would be able to sustain. Indeed, the issue was not that we do not want to pay. We need to ensure that the company is running smoothly so that everyone can safeguard their employment," said Joubert.

This is the second labour protest in two days after workers of the Public Utilities Corporation went on strike on Thursday.

Hassan said that this does not mean that workers can go on strike to resolve their issues.

"In fact, it is illegal to go on strike without going through the proper organisational channel. The first point is for us to discuss and not go on the streets. There should be more employee-employer dialogue," he added.