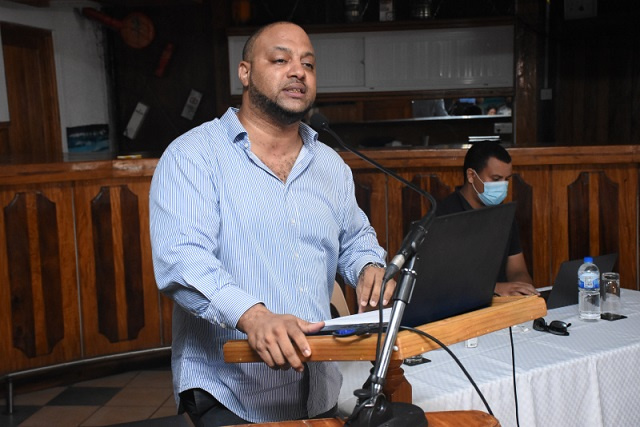 With no one else contesting, Bastienne was re-elected for another 2-year mandate. (Seychelles Nation)

Oliver Bastienne was unanimously re-elected for a two-year mandate as the chairperson of the Seychelles Chamber of Commerce and Industry (SCCI) during its annual general meeting on Thursday.
With no one else contesting, Bastienne was re-elected with all 158 votes cast for his second two-year mandate. Speaking after the election, Bastienne expressed his will to work closely with the government.
"It will be a partnership of mutual respect and trust. We will agree to disagree, but I am hopeful that we will have a positive relationship moving forward," said Bastienne.
“We have made it clear that consultation is not meant to be a platform where policies and regulations are a fait accompli. It is a place where we discuss, learn and propose. The consultation with the new Minister for Finance on the budget is one example of how this positive working relationship is working,” added the chairperson.
Moving forward Bastienne said that their interventions and support must take into consideration the current situation within the private sector.
The SCCI has also proposed a new way of working with the National Assembly which will allow the 7th cohort and SCCI to better learn from each other and work together.
“Respectfully, SCCI will not and should not be used as a political football,” said the new chair.
The SCCI is working to finalise its National Business Agenda which has been collated through consultations with the private sector. This agenda will act as an action plan to tackle urgent matters including supporting members in great difficulties, FA4JR (The Financial Assistance for Job Retention) and SETS (Seychelles Employee Transition Scheme) mechanism, the employment situation in Seychelles and the tax reform programme.
SCCI is one of the oldest not-for-profit private sector institutions in Seychelles – 115 islands in the western Indian Ocean. It provides a wide array of services through dedicated resources across the business spectrum including trade facilitation, economic analysis, trade negotiations, advocacy, and advisory services among others.
General » Be a reporter: Write and send your article » Subscribe for news alert
Tags: Oliver Bastienne, Seychelles Chamber of Commerce and Industry, National Assembly, FA4JR, SETS, Minister for Finance