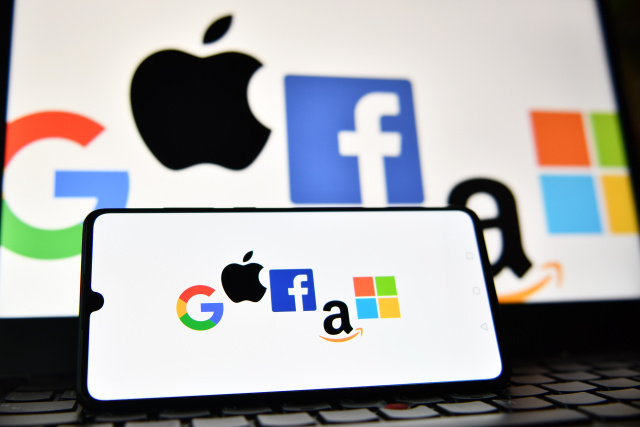 An illustration picture taken in London on December 18, 2020 shows the logos of Google, Apple, Facebook, Amazon and Microsoft displayed on a mobile phone and a laptop screen. (JUSTIN TALLIS / AFP)

(AFP) - A sophisticated cyberattack on US government agencies and private companies that was revealed this week poses a "grave risk" and thwarting it will be "highly complex," the US computer security agency said Thursday.

The US Cybersecurity and Infrastructure Security Agency (CISA) said US government agencies, critical infrastructure entities, and private sector organizations had been targeted by what it called an "advanced persistent threat actor."

CISA did not identify who was behind the malware attack but private security companies pointed a finger at hackers linked to the Russian government.

US Secretary of State Mike Pompeo also suggested involvement by Moscow on Monday, saying the Russian government had made repeated attempts to breach US government networks.

Romney likened the cyberattack to as if "Russian bombers have been repeatedly flying undetected over our entire country."

He said it highlighted "alarming US vulnerability" plus "cyber warfare weakness" and "glaringly inadequate cyber defenses."

The 2012 Republican presidential candidate condemned what he called "inexcusable silence and inaction from the White House" of President Donald Trump.

CISA said the computer intrusions began in at least March 2020 and the actor behind them had "demonstrated patience, operational security and complex tradecraft."

"This threat poses a grave risk," CISA said in a statement, adding that it "expects that removing this threat actor from compromised environments will be highly complex and challenging for organizations."

Biden, who is to be sworn in as president on January 20, said the breach affected "potentially thousands of victims, including US companies and federal government entities."

"My administration will make cybersecurity a top priority at every level of government -- and we will make dealing with this breach a top priority," he said in a statement.

"We need to disrupt and deter our adversaries from undertaking significant cyberattacks in the first place," Biden said. "We will do that by, among other things, imposing substantial costs on those responsible for such malicious attacks.

"Our adversaries should know that, as president, I will not stand idly by in the face of cyber assaults on our nation."

According to CISA, the attackers managed to breach computer networks using enterprise management network software made by the Texas-based IT company SolarWinds.

"CISA has evidence of additional initial access vectors, other than the SolarWinds Orion platform; however, these are still being investigated," CISA said.

Hackers reportedly installed malware on software used by the US Treasury Department and the Commerce Department, allowing them to view internal email traffic.

SolarWinds said up to 18,000 customers, including government agencies and Fortune 500 companies, had downloaded compromised software updates, allowing hackers to spy on email exchanges.

After the attack was detected, CISA ordered federal agencies to power down the breached software.

The content the hackers sought to steal -- and how successful they were -- remains unknown.

The FBI has opened an investigation to identify those responsible for the hack and emergency discussions have been held at the White House to discuss the government's response.

US National Security Advisor Robert O'Brien cut short a trip to the Middle East and Europe this week to deal with the fallout from the breach.

General » Be a reporter: Write and send your article » Subscribe for news alert
Tags: US, computers, hack