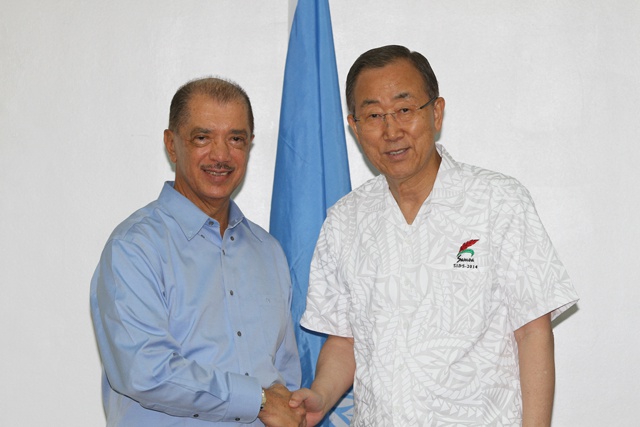 President James Michel and the United Nations Secretary General Ban Ki-Moon meeting in the margins of the UN SIDS conference in Samoa from September 1-4, 2014. Michel is heading to New York for the UN climate summit at the invitation of the UNSG. (Mervyn Marie, Seychelles News Agency)

(Seychelles News Agency) - The Seychelles President James Michel is heading to New York this weekend, at the invitation of the UN Secretary General Ban Ki-moon, where he will join other world leaders to discuss climate change issues at the UN Climate Change Summit, State House has said in a press statement.

The summit will be taking place on Tuesday September 23.

Michel met with UN Secretary General in the margins of the third UN Conference on small island developing States held between September 1 to 4, in Apia Samoa where he commended the UNSG for his efforts to put climate change on the international agenda.

Ban said during the meeting with the Seychellois head of state that he would be mobilizing various governments to materialize their pledges for funding for climate change mitigation and adaptation while stressing that climate change should be a number one priority for the world community, particularly the rising sea levels.

The State House statement noted that during his interventions at the Samoa conference Michel also made strong statements on the issue of climate change where he called for more decisive actions adding that 2015 must be the year where the world ends the debate and rhetoric on climate change.

"It is time that we recognise climate change for what it is: a collective crime against humanity. Climate change will be the single largest reason for displacement of peoples in the next 50 years. Climate change is already robbing a generation of its livelihoods.  Climate change is robbing island nations of their right to exist. We must save our future together," said Michel at the opening of the third international conference on SIDS.

The United Nations has described the climate summit being hosted by the UN Secretary-General as an opportunity to engage leaders and advance climate action and ambition.

"The Climate Summit will be about action and solutions that are focused on accelerating progress in areas that can significantly contribute to reducing emissions and strengthening resilience – such as agriculture, cities, energy, financing, forests, pollutants, resilience and transportation," says the UN.

“Climate Summit 2014 provides a unique opportunity for leaders to champion an ambitious vision, anchored in action that will enable a meaningful global agreement in 2015.”

Over a hundred world leaders are expected in New York for meeting.