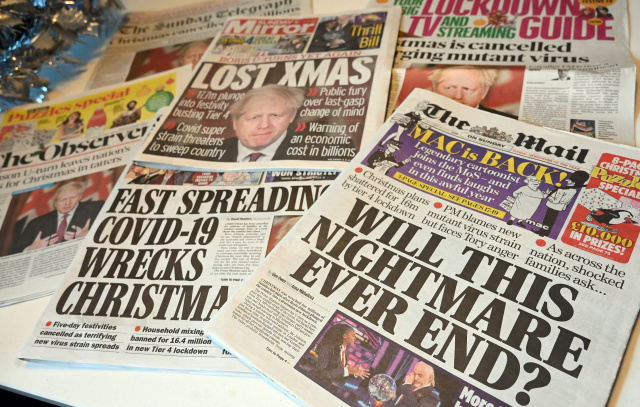 An arrangement of UK daily newspapers photographed as an illustration in Liverpool on December 20, 2020, shows front page headlines reporting on the story of Britain's Prime Minister Boris Johnson introducing new tougher coronavirus COVID-19 restrictions for London and the South East of England, cancelling Christmas gatherings for those in the new 'tier 4' category. British Prime Minister Boris Johnson on Saturday announced a "stay at home" order for London and southeast England to slow a new coronavirus strain that is significantly more infectious. He ordered new restrictions for London and south-eastern England from Sunday, saying that "residents in those areas must stay at home" at least until December 30. The measures will mean around a third of England's population cannot travel or meet other households for Christmas. (Paul ELLIS / AFP)

(AFP) - The World Health Organization is calling on its members in Europe to step up measures against coronavirus in the face of the new variant circulating in Britain, its European branch said Sunday.

Outside Britain, nine cases of the new strain have been reported in Denmark, as well as one case in the Netherlands and another in Australia, according to the WHO.

"Across Europe, where transmission is intense and widespread, countries need to redouble their control and prevention approaches," a spokeswoman for WHO Europe told AFP.

The UN agency urged its members worldwide to "increase the sequencing of SARS-CoV-2 viruses where possible and sharing of sequence data internationally, in particular, to report if the same mutations of concern are found," she said.

Several European countries decided Sunday to suspend all flights from Britain after the discovery of the new strain which London said was "out of control".

It said it had "no evidence to indicate any change in disease severity, but this is also under investigation."

For its part the European Centre for Disease Prevention and Control (ECDC) said "ongoing circulation of this variant outside of the UK cannot be excluded."

It advised that "people with an epidemiological link to cases with the new variant or travel history to areas known to be affected should be identified immediately to test, isolate and follow up their contacts in order to stop the spread of the new variant."

The new strain's scientific name is VUI 202012/01, with VUI standing for Variant Under Investigation.

Last week, Europe became the first region in the world to pass 500,000 deaths from Covid-19 since the pandemic broke out a year ago, killing more than 1.6 million worldwide and pitching the global economy into turmoil.

Countries are shutting down their economies with restrictions again in a bid to rein in the virus.

General » Be a reporter: Write and send your article » Subscribe for news alert
Tags: health, WHO, Britain