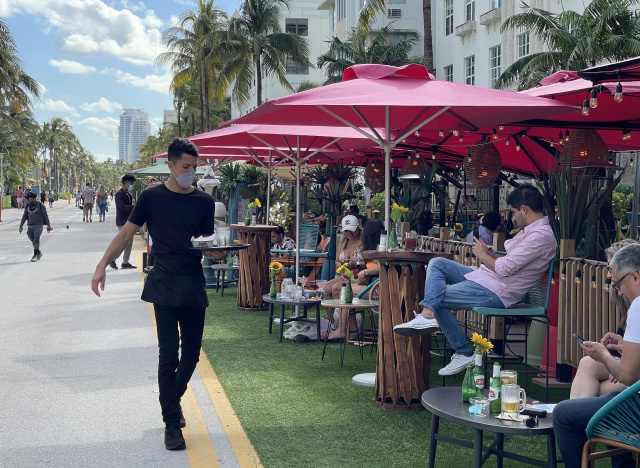 People enjoy a drink on the outdoor area of Ocean drive restaurants on December 19, 2020 in South beach, Florida amid the coronavirus pandemic. (Daniel SLIM / AFP)

(AFP) - President Donald Trump on Tuesday rejected a massive Covid economic relief package passed by Congress, branding it "a disgrace" in an act of political brinkmanship less than a month before he must leave office and when millions of Americans are suffering fallout from the pandemic.

Trump dropped the bombshell via a pre-recorded statement made in the White House and sent out on Twitter.

It came just a day after his Republicans and the Democrats finally agreed overwhelmingly to a $900 billion bill meant to throw a lifeline to businesses and people struggling to keep heads above water.

In his address, Trump said he would refuse to accept the bill as it is and demanded changes, notably a big increase in the proposed $600 direct payments to less well-off Americans.

Tapping into his nationalist "America First" brand, Trump also castigated measures added onto the bill during complex negotiations that would provide funding for projects benefiting US partners abroad and other non-Covid related items like the environment.

"It really is a disgrace," he said. "I'm also asking Congress to immediately get rid of the wasteful and unnecessary items from this legislation, and just send me a suitable bill."

Trump has not yet received the bill and he did not explicitly say he would not sign. If he actually vetoed the package, Congress would almost certainly quickly override that, given the bipartisan support.

In what is widely expected to be only a portion of a slew of presidential pardons and commutations issued in the dying days of the administration, the White House also announced late Tuesday that 20 people had been selected.

They included two convicted in special counsel Robert Mueller's Russia probe into Trump campaign ties to Moscow and four men convicted in connection with the mass killing of at least 14 Iraqi civilians.

The Covid package is wrapped into a $2.3 trillion, almost 5,600-page "coronabus" bill that includes a so-called omnibus bill to fund the government for the coming year.

A congressional override of a veto would mark an embarrassing defeat for Trump, who is spending his final weeks in office before the January 20 inauguration of Democrat Joe Biden by pursuing unprecedented attempts to try and get the election results overturned.

However, until he has the bill on his desk he has no need to veto.

And Trump's motives in picking the fight with Congress are intertwined with his extraordinary ongoing struggle to overturn the November 3 election.

Despite courts across the country rejecting his baseless claims of fraud, he has enough allies on the right of the Republican party -- and a devoted following among some voters -- to keep trying to derail the traditionally smooth presidential transition.

He pushed again Tuesday in a second lengthy video statement from the White House, claiming that he won in a "landslide."

His challenge now puts the Republican party in a bind, forcing lawmakers who angered him by declaring Biden the true winner to choose whether they dare defy him further and risk wrecking Covid relief.

Democratic leaders pounced immediately to insist that their party had been in favor of higher individual relief payments from the start.

"Trump needs to sign the bill to help people and keep the government open and we're glad to pass more aid Americans need. Maybe Trump can finally make himself useful and get Republicans not to block it again."

"At last, the President has agreed to $2,000 -- Democrats are ready to bring this to the Floor this week by unanimous consent. Let’s do it!" said Nancy Pelosi, speaker of the House of Representatives, which is Democrat-controlled.

Senator Bernie Sanders, who sought the Democratic nomination for president on a progressive platform, also joined in, tweeting that he "first introduced a bill to provide a $2,000 direct payment with @SenKamalaHarris & @EdMarkey 7 months ago."

"Now, Mr. President, get Mitch McConnell and your Republican friends to stop opposing it and we can provide working class Americans with $2,000."