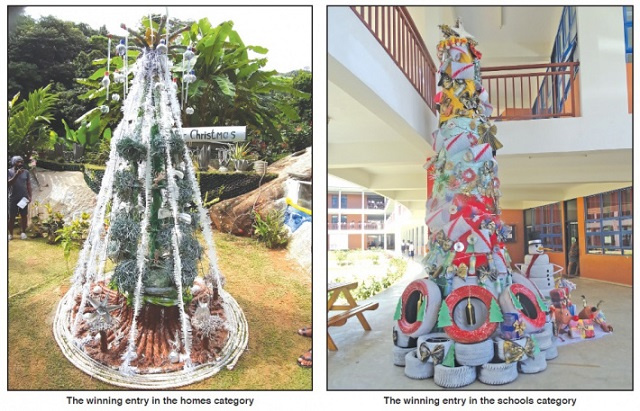 "It was really hard to decide which one was best. I couldn't help but be impressed by what the contestants were using to make their Christmas tree from," said the main organizer, Jeanette Larue, the director general for environment education.

Participants in the competition had to make their own Christmas trees using recycled materials found in the environment. While deciding which tree was most deserving of the first prize, judges looked at the originality and uniqueness of the design as well as creativity coherence and craftsmanship.

The winners of the competition received their prizes on Monday which were a coco-de-mer each as well as cash prizes sponsored by H Savy Insurance, the Seychelles Islands Foundation and the Seychelles National Parks Authority.

In the home category, a resident from the southern district of Anse Royale, Andrea Bristol, won the top prize, followed by Clara Tamatave from Au Cap and Arianne Poussou from Anse Aux pins.

The competition came at a most appropriate time as the effects of the COVID-19 pandemic make the traditional plastic Christmas tree not so readily available.

"The efforts made to create Christmas trees out of recyclable materials has shown that we do not have to keep importing decorations from other countries," said the Minister of Environment, Flavien Joubert, at the prize ceremony.

Over 25 schools and some 15 families participated.

"Many of the materials came from discarded rubbish left behind on beaches and the way they were recycled was just fantastic," said Larue.

The competition also attracted other groups which were not catered for and Larue said that next year "we will make it bigger as we have received many demands from businesses and organisations that wanted to participate."

"Coupled with the way recycled materials are being used to decorate the districts, I can say this has been a really big hit so we will definitely come with a second edition. However, this time we will be targeting trees made from natural materials rather than just the recycled. This could prove to be a big attraction for visitors," she added