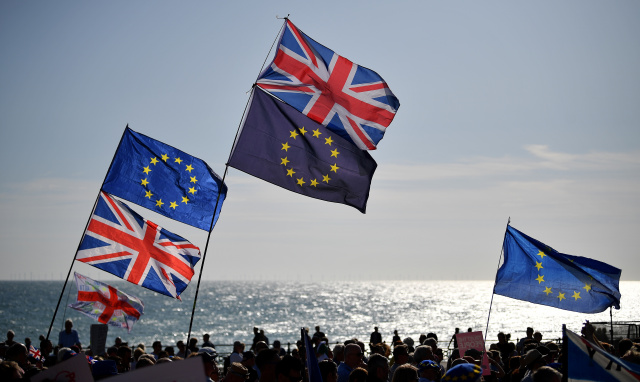 (FILES) In this file photo taken on September 21, 2019 Protesters wave EU and Union flags as they gather for a march and rally organised by "The People's Vote" in Brighton, on the south coast of England on September 21, 2019, to call for politicians to give the public a final say referendum on Brexit. The European Union and Britain could agree the terms of a post-Brexit trade deal within hours, European sources told AFP on December 23, 2020, as negotiations continued. (DANIEL LEAL-OLIVAS / AFP)

(AFP) - Britain and the European Union were expected to announce a Christmas Eve trade deal Thursday after 10 months of Brexit talks dragged out over yet another late night session.

The two sides had hoped to unveil the accord on Wednesday, and the front pages of several British newspapers already proclaimed victory for Prime Minister Boris Johnson.

But EU member states had a number of questions about the text and cross-Channel diplomacy continued through the night, with Johnson and Commission chief Ursula von der Leyen expected to announce a breakthrough shortly after dawn.

An EU source told AFP that "if all goes well" the two leaders should talk by phone in the morning to seal the deal, however this appeared to get pushed back due to last minute haggling over fishing quotas.

"There is a fight over the numbers, and that is a bad sign," one European source said, while another added that "negotiations are still not finished".

The last-minute delays came after European officials had confidently told journalists on Wednesday afternoon: "We are in the final phase."

Diplomatic sources said member states, in particular France, had pressed the Commission to go back to the British camp to seek specific guarantees on parts of the accord.

The British pound and Asian markets were rising on the expectation of a deal, and a French government source said UK negotiators had made "huge concessions" on fisheries -- the key sticking point as the clock ticks down to Britain's departure.

The deal, if it is confirmed, would come just days before Britain is set to leave the EU's single market at the end of the year, sparing the two sides from trade tariffs.

An agreement -- which would still need to be translated and tidied up by lawyers -- could be approved provisionally before the cut-off date and then scrutinised by EU lawmakers in the new year to avoid a cliff edge.

Britain formally left the EU in January, nearly four years after a referendum on membership that split the nation but has had been in a transition period since then.

The focus in the talks had shifted since Monday to cross-Channel calls between Johnson and von der Leyen after exhausted officials failed to close the gap on how to share access to UK fishing waters.

The remaining differences between the two camps were narrow but deep, in particular over fishing, with EU crews facing a dramatic cut in their catch from British waters.

London has pushed to reduce EU fishing fleets' share of the estimated 650-million-euro ($793 million) annual haul by more than a third, with changes phased in over three years.

The EU, in particular countries with northern fishing fleets like France, Denmark and the Netherlands -- was insisting on 25 percent over at least six years.

Brussels was ready to negotiate until the end of the year -- or even "beyond", as EU negotiator Michel Barnier suggested on Tuesday -- but time was running out for any deal to be provisionally applied.

Failure to reach a deal would mean tariffs on cross-Channel trade in food and goods, exacerbating the economic shock of a return to a customs border after 47 years of integration.

Britain and France experienced a foretaste of what the chaos might look like this week when France abruptly closed its borders to British lorries, trains and planes.

Paris was responding to concerns about a new coronavirus variant spreading in Britain, but the huge queues of trucks and threats of supply shortages were taken as an ominous sign.

Both London and Brussels insist they are ready for a return to tariffs and a customs border -- but business groups are sounding the alarm about the possible disruption to come.

General » Be a reporter: Write and send your article » Subscribe for news alert
Tags: Britain, EU