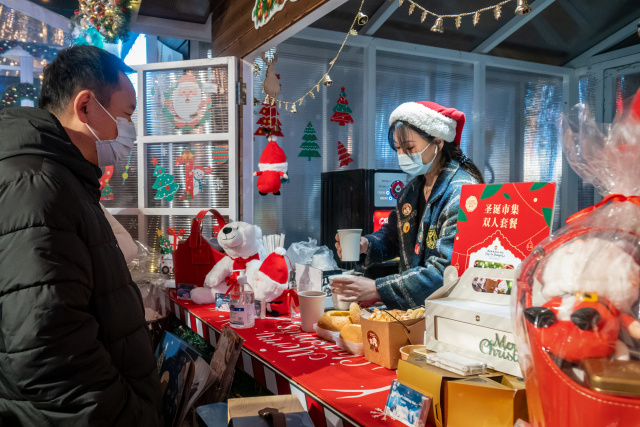 This photo taken on December 24, 2020 shows a vendor offering drinks to a customer at a Christmas-themed market outside of a shopping mall complex on Christmas Eve in Shanghai. (STR / AFP)

(AFP) - Christmas festivities began Friday, with hundreds of millions across the world under coronavirus restrictions celebrating a pared-down version of a holiday typically marked by travel and large gatherings.

The battle to halt the pandemic, which has claimed more than 1.7 million lives, is far from over despite the launching of mass vaccine campaigns that offer the promise of an eventual return to normalcy.

"It really is heartbreaking to see," said Park Jae-woo, a member of the Yoido Full Gospel Church in Seoul which would usually expect up to 10,000 worshippers, but on Friday was only able to welcome 15 staff and choir members.

And in Catholic-majority Philippine, services were rocked when a 6.3-magnitude earthquake struck the country, capping off a troubled yuletide already muted by bans on parties and carol singing.

The mass, traditionally held at midnight, had been moved forward by two hours to 7:30 pm (1830 GMT) to meet Italy's curfew rules.

Before the pandemic hit, several thousand believers and tourists had obtained precious tickets to attend the papal mass.

On Thursday evening, St Peter's Square, usually thronged with people on Christmas Eve was deserted, illuminated by the glow of its towering Christmas tree and the lights of a police car.

Tough new coronavirus restrictions were imposed on Thursday over the Christmas and New Year period across Italy, the country hardest hit by the virus in Europe, with nearly 71,000 deaths and more than two million cases since the beginning of the pandemic.

The Christmas Eve mass commemorates the birth of Jesus of Nazareth in Bethlehem.

In his homily, the Argentinean pope stressed that the birth of a child reminds us not to spend our days "lamenting our lots, but soothing the tears of those who suffer", serving "the poor".

Francis, who just celebrated his 84th birthday, will address his eighth Christmas message "Urbi et orbi" ("to the city and the world") Friday by video from the apostolic palace, to prevent a crowd from gathering in St Peter's Square.

Bethlehem, where Christians believe Jesus was born, was preparing for a Christmas unlike any in its recent history.

The Christmas Eve mass at the Church of the Nativity is traditionally the highlight of a holiday season that sees hundreds of thousands of visitors flock to the Palestinian city in the occupied West Bank.

The mass online this year, with only clergy and select individuals allowed inside the basilica, which was sterilised Thursday ahead of the service.

"Everyone feels darkened, tired, exhausted, oppressed for too long under the heavy burden of this pandemic that besieges our lives," said the Latin Patriarch of Jerusalem, Pierbattista Pizzaballa.

In war-ravaged northeast Syria, hundreds of residents of a predominantly Christian neighbourhood in the town of Qamishli ditched face masks and donned Santa hats, throwing caution to the wind to celebrate a Christmas tree lighting ceremony.

"We were concerned celebrations would be cancelled this year due to the novel coronavirus, but as you can see everyone is here celebrating and we are happy," said Maria Danhou, a 36-year-old mother of two.

Germany has been forced to cancel its famous Christmas markets, while in Kuwait, churches were closed until January 10 despite being home to a large Christian community.

For many, the isolation that has defined the past year will continue into Christmas Day and beyond -- such as in Belgium, where residents are largely limited to welcoming a single visitor.

Britons, meanwhile, were cut off from swathes of the world, due to the emergence of a new Covid-19 strain.

Some UK border restrictions have been temporarily relaxed for the holidays, but thousands from other European countries are still stranded in England.

"Home for Christmas? Forget it," said Laurent Beghin, a French truck driver who delivered his cargo but was still stuck days later.

General » Be a reporter: Write and send your article » Subscribe for news alert
Tags: health, Christmas