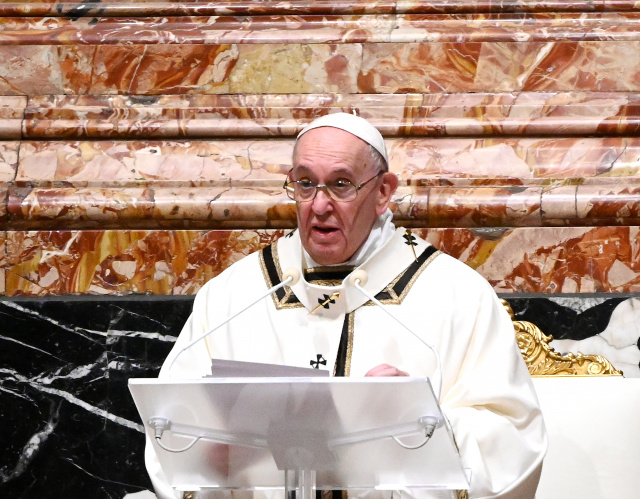 Pope Francis speaks during his homely as he leads a Christmas Eve mass to mark the nativity of Jesus Christ on December 24, 2020, at St Peter's basilica in the Vatican, amidst the Covid-19 pandemic, caused by the novel coronavirus. (Vincenzo PINTO / POOL / AFP)

(AFP) - Pope Francis in his Christmas message on Friday called for "vaccines for all, especially the most vulnerable and most in need in all regions of the planet" for the coronavirus, which he said had exacerbated existing global crises.

The pontiff also touched on the plight of children caught up by war, singling out victims in Syria, Yemen and Iraq in his Christmas message.

Vaccines were "glimmers of hope in this period of darkness and uncertainty," Francis said in the annual "Urbi et Orbi" speech "to the city and the world".

"I call on everyone, on leaders of states, on businesses, on international organisations, to promote cooperation and not competition, to find a solution for everyone: vaccines for all, especially the most vulnerable and most in need in all regions of the planet."

The pandemic had come at a "moment in history, marked by the ecological crisis and grave economic and social imbalances", the pope added, saying that made it "all the more important for us to acknowledge one another as brothers and sisters".

And "on this day... let us turn our gaze to the many, all too many, children worldwide, especially in Syria, Iraq and Yemen, who still pay the high price of war," he added.

"May their faces touch the consciences of all men and women of good will, so that the causes of conflicts can be addressed and courageous efforts can be made to build a future of peace," he said.

Pope Francis will make a historic visit to Iraq in March, the Vatican said Monday, the first ever by a pontiff and which will include a trip to the city of Mosul, a former jihadist stronghold.

The pope has long spoken of his desire to visit the Middle Eastern country, where two decades of conflict have taken a heavy toll on Christian communities.

The Argentinian-born pope called for peace and reconciliation in Libya and Iraq, "particularly to the Yazidis, sorely tried by these last years of war."

General » Be a reporter: Write and send your article » Subscribe for news alert
Tags: Christmas, pope