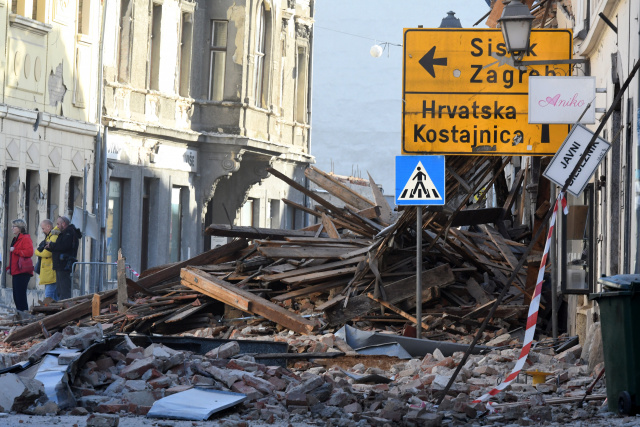 People stand next to the rubbles of damaged buildings in Petrinja, some 50kms from Zagreb, after the town was hit by an earthquake of the magnitude of 6,4 on December 29, 2020. The tremor, one of the strongest to rock Croatia in recent years, collapsed rooftops in Petrinja, home to some 20,000 people, and left the streets strewn with bricks and other debris. Rescue workers and the army were deployed to search for trapped residents, as a girl was reported dead.(DENIS LOVROVIC / AFP)

(AFP) - Hundreds of people were unable or afraid to return home in central Croatia Wednesday as rescue workers sifted the rubble of a deadly earthquake that claimed at least seven lives.

A series of morning aftershocks jangled nerves in towns south of Zagreb, the day after Tuesday's 6.4-magnitude quake crumbled village homes, tore off slabs from buildings and crushed cars under mountains of bricks.

Many in and around the hard-hit town of Petrinja spent a sleepless night in fear of new tremors. While hundreds sheltered in a nearby military barracks, others opted to stay in their cars.

"We go inside to quickly grab what we need and we return here," said Visnja, a 66-year-old sitting around a fire outside her home in Petrinja Wednesday morning after having slept in her car.

"My flat is completely turned upside down," he told AFP. "It still has no electricity, all the food in my fridge will be wasted."

In the nearby village of Majske Poljane, the quake killed five people as well as mangling homes and farm buildings in the poor community.

"I can hardly wait for this horrible year to end.... we have only one more day," whispered Silvana Velic, a 29-year-old mother of four huddled in the cold outside her damaged yellow house.

After spending the night in a car her family will now sleep in a donated camping trailer.

"The house is not for living any more. The roof collapsed, walls are cracked, the kitchen is destroyed," she added, still pale from the shock.

Local volunteers delivered food, clothes and blankets to those in need, while civil protection workers promised containers or camping trailers for those unable to sleep at home.

The European Union said it was mobilising aid from other member states, including containers, winterised tents and electrical heaters.

The bloc's crisis management chief, Janez Lenarcic, landed in Croatia Wednesday to assess the wreckage and "assure the Croatian people that the EU stands in full solidarity with them".

Rescue teams with dogs spent Tuesday night scouring ruins in the area, but no new victims were found by the mountain rescue service, the organisation's chief Josip Granic told reporters in the morning.

Tuesday's toll included a young girl struck by falling debris on a street in Petrinja, a man who had tried to resuscitate her told local media.

Another victim was buried beneath rubble in a village church, a priest told state news agency HINA.

At least 20 people were injured, Croatian police said, while six survivors were rescued from the wreckage.

The quake, which was felt across the Balkans, shook buildings that had already been weakened by a moderate tremor in the same Croatian region on Monday.

From the Vatican, Pope Francis expressed sympathy for the victims in the mainly Catholic country.

"I hope that the authorities of the country, with the help of the international community, will soon be able to alleviate the suffering of the dear Croatian people," he said.

General » Be a reporter: Write and send your article » Subscribe for news alert
Tags: Croatia, earthquake