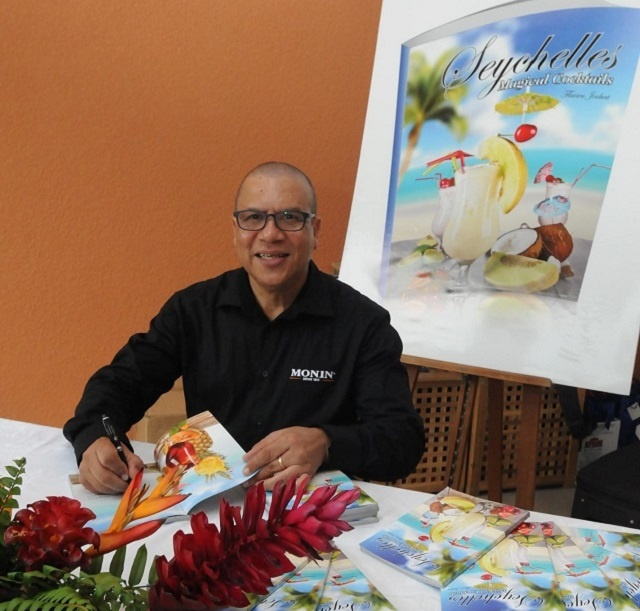 His second book, 'Seychelles Magical Cocktails', which shares 73 recipes of cocktails with and without alcohol, was published in England. (Jude Morel)

(Seychelles News Agency) - The longest-serving principal of the Seychelles Tourism Academy (STA), Flavien Joubert, has retired to concentrate on writing full time, a major change in a career that has focused on tourism for 38 years.

Joubert, whose contract ended December 31 after working for 13 years with the academy, is already the author of four books which are available locally and on the international market.

Joubert told SNA that he currently has a contract to write four more.

"My books are very popular. Three are about Creole food, exotic cocktails and one book is about my life as a refugee -- 'A True Story'. My books bring me and my family extra revenue. I have attributed all the above to my career in tourism. It not only develops you personally, it also develops you mentally and academically," he said.

His second book, 'Seychelles Magical Cocktails', which shares 73 recipes of cocktails with and without alcohol, was published in England and came out in 2014.

Joubert's third book, 'Fish and Seafood Recipes of the Seychelles Islands', was published in England in 2016.

His latest publication --  'Refugee, A Seychellois boy's story' -- is a true life experience where Joubert spent three months as a war refugee when the war broke out between Greeks and Turks, who were fighting over Cyprus. It came out in 2019.

His books are available in the United States, on Amazon and at Antigone bookshop in the Seychelles.

Joubert worked on his book while he not only headed the tourism academy but also headed tourism establishments in Seychelles, a career that spanned over 38 years.

It all started at the age of 16 when he got a scholarship from the Seychelles government offered by Archbishop Makarios of Cyprus in 1973 to attend the Hotel and Catering Institute, a prestigious boarding school located in Greek-controlled Nicosia, for a five-year course in hospitality.

Just a year later, he became a war refugee when the war broke out between Greeks and Turks in 1974, the foundation of his fourth book. He was rescued and flown to Great Britain where he was eventually reunited with his older sister in Brighton, England. Then 17 years old, he stayed in England to resume his studies.

After his studies, Joubert worked in countries such as England, France, Holland, Singapore and Switzerland. He then ventured into teacher training and school studies.

"I then taught hospitality management in Hamburg, Germany; Singapore; Kent and France. I've also opened a hotel school in Malawi. Of course, after a while, I ended up again in Seychelles. Yes, indeed I had a wonderful career."

He said that tourism is a versatile industry and how the skills someone can gain through hospitality can be useful.

"In tourism, one cannot be unemployed. If one cannot work in hotels or the catering industry, especially now with COVID-19, if you have the experience, you can survive with a small business," said Joubert.

Joubert describes his career as rewarding and maintains that the tourism and hospitality industry is a way of life.

"You sleep at night and when you wake up, all you want to do is go to work, I mean that's how I felt... Tourism gave me what I have, what I own," he told SNA

As for his time heading the Seychelles Tourism Academy, Joubert attributes the success of the school to the hard work his team did throughout the years.

"Today, there is discipline. Ninety-eight percent of the staff are trained teachers and professionals and several teachers are trained to Masters level. Today the STA has many local partners and international partners, very fervent sponsors. The school is now stable and it is time for me to go," he added.

He wished whoever will be his successor all the best and advises the person to stay strong, focused and fearless.

A Hilton Academy opens in Seychelles for high-level tourism training