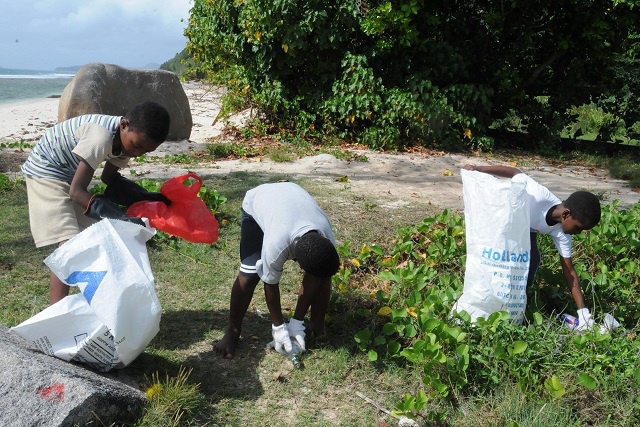 Three young boys helping to clean an area near a beach. Several groups participated in the clean up the world campaign over the weekend. (Joena Bonnelame, Seychelles News Agency)

(Seychelles News Agency) - A quick stroll down the streets of the Seychelles capital of Victoria, or even the streets of the different districts on the three main inhabited islands of Mahé, Praslin and La Digue, it is not uncommon to notice a group of people engaged in their cleaning and landscaping duties. These ‘unsung heroes’ are often seen at dawn with their brooms and garbage collection bags or in waste compactor trucks working to keep the small island nation with a population of around 90 thousand people clean.

The Seychelles Landscape and Waste Management Agency oversees the work done by some 350 cleaning contractors spread out on Mahé, Praslin and La Digue with the aim of reducing the amount of litter in the streets.

However, some areas are not cleaned that regularly and in spite of the presence of public bins; such areas are often prone to illegal dumping of waste.

"It is a shame to see the state of some public places. People do not realize when they are littering they are destroying the beauty of our country," Christianne Hoareau told SNA.

"We are picking up mainly alcohol bottles and other rubbish. I personally think that we have done enough sensitization and now it is time for people to change their habits and become more responsible and stop littering," said Eric Alcindor, a private cleaning contractor.

These comments come now that its that time of the year when people worldwide, not excluding Seychelles are being called upon to give a helping hand in the annual Clean up the World campaign.

The three day 'Clean-up the World campaign’ which started on Friday September 19 came to an end yesterday.

Initiated in Seychelles since 1998, the campaign aims at inspiring and empowering the population to maintain a clean environment. This year’s theme was, ‘Mon sesel sa! Annou netway li!’ (It’s my Seychelles! Let us clean it).

Prior to the event, a committee was formed to find ‘hotspots’ in each of the twenty-five districts across the three main islands that needed extra cleaning. These areas where mainly places of cultural or historical importance, around recreational and residential areas and along important waterways.

Groups were mobilized throughout the three days to clean these designated areas, amongst them were several school children and youths group as well as different work organisations.

"When we started talking about Clean Up the World campaign, on Friday morning, we got a lot of children who wanted to participated. We are happy that our school not only talks but also act and try to keep our school clean,"  said Wendy Noel, who is in charge of the Eco-school club at the English River Secondary School.

Several of the 2,300 factory workers of the Indian Ocean Tuna, Ltd (I.O.T), were amongst the different companies who also got their hands dirty uprooting rubbish and disposing them in gunny bags.

"Every year IOT participates in the Clean up the World Campaign," Berty Isis who is an IOT staff told SNA.

"Our contribution is to help keep Seychelles clean. Each individual needs to understand that cleanliness starts with one self."

In pursuit of a cleaner Seychelles

What was started in 1993 by Australian national, Ian Kiernan, with the support of the United Nations Environment Programme (UNEP) the Clean up the World campaign which is spread over three days, today sees the participation of some 35 million people in over 130 countries.

It is now the 16th year since Seychelles joined this campaign taking on board the international campaign's theme of 'Our place, Our planet, Our responsibility' and promoting this theme among the population.

The organizing committee of the Clean Up the World campaign in Seychelles hopes the island nation continues to adopt good habits when it comes to waste disposal.

"We hope the public will keep this good practice of cleaning everyday. They should not wait for the Clean Up the World period to do so," said Emmanuel Elizabeth, the Chairperson of the Clean up the World Committee in an interview with SNA.

Reduction in amount of litters collected

According to information provided to SNA by the Chief Executive Officer of the archipelago's Landscape and Waste Management Agency Lena Desaubin last year some 480 thousand tonnes of waste was collected during the Clean up the World Campaign.

This year's campaign has seen a reduction in the amount of waste collected, which according to the Seychelles Landscape and Waste Management Agency was partly due to heavy rainfall throughout the three days.

The other reason given is that during the course of this year bulky waste have been collected at different intervals on a regional basis so people did not have to wait for the clean up the world period to throw out whatever old fridge, cooker or other appliances that were not needed.

On Praslin, the second most populated island of the archipelago, some 600 tonnes of rubbish were collected as a result of the participation of businesses and private home owners. In an interview with SNA, Nigel Valmont, a representative of the organising committee on Praslin, stated that this was above their expectations.

"We had made available eight pick-up trucks for the campaign," said Valmont.

Explaining the increase in amount of waste collected on Praslin in this year’s campaign, Valmont noted that "there were forty private trucks that came to dump their debris at the landfill as it was free of charge to access the facility."

He explained that most of the trucks belonged or were rented out by private dwellings, tourism establishments, garages and others who wanted to get rid of unwanted rubbish.

As for La Digue, the amount of waste collected were not as significant, 150 tonnes only, considering the smaller population of less than 3,000 people on the island. "We were targeting mainly metals," said Hansel Vidot a representative of the organising committee on La Digue.

Most of the inhabitants of this island use bicycles, as a means of transport and the metals are either recycled or disposed of.

All waste that have been collected this weekend is properly dumped at landfills on each of the three main islands of Mahé, Praslin and La Digue.

By 6pm local time yesterday some 479 tonnes of rubbish had been collected on Mahé.

"This is far below our expectation although we have generally noted a reduction in littering," Emmanuel Elizabeth, the Chairperson of the Clean up the World Committee told SNA, reiterating that bulky waste such as old household appliances still makes up the majority of collected rubbish.

However, Elizabeth noted that pick up tucks were still going round the island collecting rubbish piled up near bin sites since early this morning.

General » Be a reporter: Write and send your article » Subscribe for news alert
Tags: Clean Up the World, Landscape and Waste Management Agency