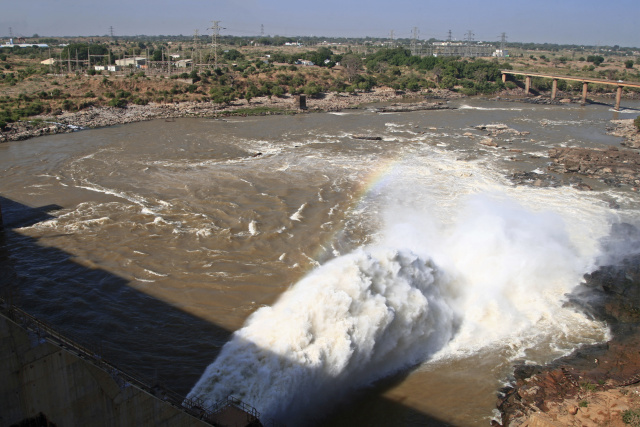 A picture shows water bursting out of the Roseires Dam on the Blue Nile river at al-Damazin in southeastern Sudan, on November 27, 2020. The Roseires hydropower complex is located 105 kilometres east of the Grand Ethiopian Renaissance Dam. (Ebrahim HAMID / AFP)

Previous three-way talks have failed to produce an agreement on the filling and operation of the vast reservoir behind the 145-metre (475-foot) tall Grand Ethiopian Renaissance Dam (GERD), a hydropower project which broke ground in 2011.

On Sunday, the three countries held a new round of talks by video conference in the virtual presence of South African officials, as well as other international observers. South Africa currently holds the African Union's rotating chair.

"The meeting concluded ... that this week will be devoted to bilateral talks between the three countries, the experts, and the observers," Sudan's water ministry said in a statement.

This week's talks will pave the way "for the resumption of tripartite negotiations on Sunday January 10 in the hope of concluding by the end of January," it noted.

Ethiopia's water ministry expressed a "positive outlook" toward a draft document circulated among the three countries for negotiation, and that Sudan also supported the approach being taken.

Egypt "categorically rejected the document", the ministry said in a statement posted on Facebook.

Ethiopia said it had put forward alternative approaches for consideration by the other parties ahead of the next meeting.

"Ethiopia is committed to conclude the negotiation with good faith to reach an agreement," the ministry said.

Egypt, a country of more than 100 million people which depends on the Nile for about 97 percent of its irrigation and drinking water, opposes unilateral moves by Ethiopia, fearing its dam would severely cut its water share.

The comments rankled Egypt's foreign ministry, which summoned Ethiopia's top diplomat in Cairo and issued a statement condemning the remarks as "an attack on the Egyptian state".

Sudan hopes the dam will help tackle flooding, but has also warned that millions of lives would be at "great risk" if no binding agreement was reached.

Both countries have called for a legally binding political solution to the dispute.

Ethiopia, the second most-populous country in Africa, says the hydroelectric power produced at the dam is vital to meet the power needs of its 110 million people.

"Ethiopia will not agree to a GERD deal that will in any way restrict its right to use the Nile waters," the ministry said after Sunday's talks.

It insists downstream countries' water supplies will not be affected.

Ethiopia announced in July that it had reached its first-year target for filling the dam's massive reservoir, a move that sparked anxiety in Cairo and Khartoum.

The Nile, the world's longest river, is a lifeline supplying both water and electricity to the 10 countries it traverses.

Its main tributaries, the White and Blue Niles, converge in the Sudanese capital Khartoum before flowing north through Egypt to drain into the Mediterranean Sea.