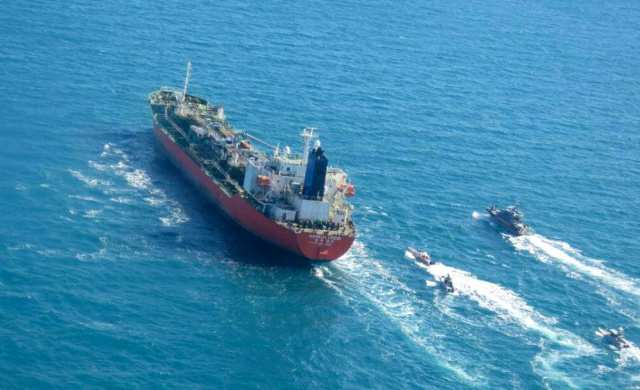 A picture obtained by AFP from the Iranian news agency Tasnim on January 4, 2021, shows the South Korean-flagged tanker being escorted by Iran's Revolutionary Guards navy after being seized in the Gulf. "A Korean ship was seized in Persian Gulf waters by the Revolutionary Guard's navy and transferred to our country's ports," Fars news agency said without naming the vessel. "This tanker had a South Korea flag and was seized over oil pollution and environmental hazards," it added. (TASNIM NEWS / AFP)

(AFP) - Iran said Monday its Revolutionary Guards had seized a South Korean-flagged tanker in Gulf waters for breaking "environmental laws", at a time of heightened tensions with the United States.

South Korea demanded the release of the Hankuk Chemi and its multinational crew of 20 and deployed an anti-piracy unit to the area, close to the strategic Straits of Hormuz.

The Guards said on their Sepahnews website that the ship carrying 7,200 tonnes of oil chemical products "was seized by our force's (navy) this morning".

"This tanker was headed from Saudi Arabia's Al Jubail port and was seized due to the repeated infringement of maritime environmental laws," it added.

South Korea's deputy foreign minister was due to visit Tehran in the coming days, according to Iranian officials, who want South Korea to release billions in assets held because of US sanctions.

The seizure follows days of high US-Iranian tensions marked by the first anniversary of the US assassination of Iran's revered military commander Major General Qasem Soleimani in a Baghdad drone strike.

The United States Sunday reversed a decision to bring the aircraft carrier USS Nimitz home from the Gulf, with the Pentagon citing "recent threats" by the Islamic Republic.

On Monday, Iran said it had started the process to enrich uranium to 20 percent purity, a move that quickly drew international concern.

Iranian foreign ministry spokesman Saeed Khatibzadeh said in a statement the tanker's seizure was over a "purely technical issue and due to polluting the sea".

"Just like other countries, Iran is sensitive towards such infractions, especially polluting the maritime environment, and therefore confronts it in the framework of law."

The Guards said the arrested crew were from South Korea, Indonesia, Vietnam and Myanmar.

A photo released by Sephanews appeared to show three speedboats and a patrol boat approaching the tanker.

The seizure had come at the request of Hormozgan Province's maritime organisation and upon the order of the provincial prosecutor, Sepahnews said.

The Guards' statement did not specify where the tanker was seized but said it was transferred to Bandar Abbas port in Hormozgan with the "case handed to judicial authorities".

It had continued on its path despite warnings by passing Guards' patrols before being seized.

South Korea's foreign ministry said it had confirmed the safety of the crew and was now demanding that the vessel be released.

The country's defence ministry said it had dispatched its anti-piracy Cheonghae unit to waters near the Strait of Hormuz.

In Washington, a State Department spokesperson called the seizure of the ship "part of a clear attempt to extort the international community into relieving the pressure of sanctions".

"We join the Republic of Korea's call for Iran to immediately release the tanker," said the spokesperson.

Shortly before news of the ship's seizure, Khatibzadeh said in a press conference that Tehran was expecting a visit "in the coming days" by South Korea's deputy foreign minister.

The spokesman complained about the "slow" process of unfreezing funds from the Islamic republic's oil money, blocked by Seoul over fears of violating US sanctions.

According to Iran's central bank governor Abdolnasser Hemmati, the country has "$7 billion of deposits in South Korea" that can neither "be transferred nor do we get any returns on, while they ask us for the costs" of holding the funds.

The incident was the first seizure of a major vessel by the Iranian navy in more than a year.

In July 2019, the Guards seized the British-flagged oil tanker Stena Impero in the sensitive Strait of Hormuz for allegedly ramming a fishing boat and released it two months later.

It was at the time widely seen as a tit-for-tat move after authorities in the British overseas territory of Gibraltar detained an Iranian tanker and later released it over US objections.

The Guards seized at least six other ships in 2019 over alleged fuel smuggling.

Tensions have run high in the Gulf in recent years after the United States stepped up its campaign of "maximum pressure" on Iran following its 2018 withdrawal from the landmark nuclear deal.

The escalation saw ships mysteriously attacked, drones downed and oil tankers seized in the strategic strait -- a chokepoint through which a fifth of world oil output passes.

General » Be a reporter: Write and send your article » Subscribe for news alert
Tags: Iran, SKorea