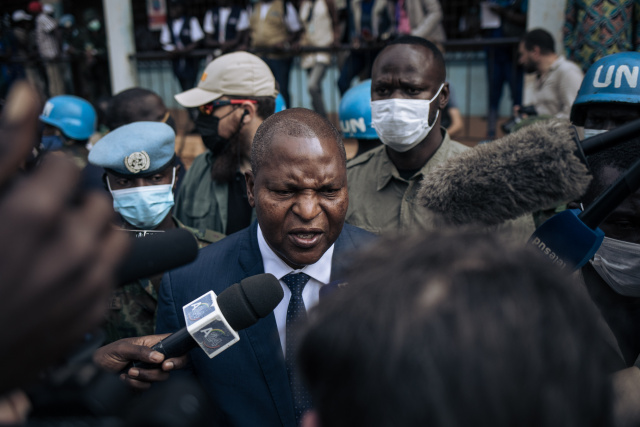 Central African Republic President Faustin Archange Touadera (C) addresses the media after he cast his ballot at the Barthélemy Boganda high school polling station in the 1st district in Bangui, Central African Republic (CAR), on December 27, 2020 during the country's presidential and legislative elections. Voting began in the Central African Republic on December 27, 2020, in a key test for one of the world's most troubled nations.
The polls take place after a week of turbulence, marked by accusations of an attempted coup, the brief seizure of the CAR's fourth-largest town and the dispatch of military personnel by Russia and Rwanda to help its beleaguered government. (ALEXIS HUGUET / AFP)

(AFP) - Central African Republic President Faustin Archange Touadera has won an outright election victory after a tense first round of voting in the coup-prone country, the electoral commission announced on Monday.

The December 27 presidential election, which coincided with legislative polls, took place as a coalition of armed rebel groups renewed an offensive that left thousands unable to cast their ballots.

Runner-up Anicet Georges Dologuele, who won 21.01 percent to Touadera's 53.9 percent, labelled the vote a "farce", telling AFP: "There were many irregularities and instances of fraud."

Touadera's government controls only about one-third of the former French colony, with militia groups that emerged from a conflict in 2013 controlling the remainder of the territory.

According to official figures, voting did not take place at all in 29 of the country's 71 sub-prefectures and was curtailed in six others. Last Wednesday, the opposition called for the vote to be annulled, calling it badly flawed.

On Monday, National Elections Authority (ANE) chief Mathias Morouba said Touadera, 63, won "an absolute majority" of the vote and had been "declared elected".

According to the ANE, turnout had reached 76.31 percent.

The rebels, after threatening to disrupt the elections and "march on Bangui", have been kept away from the capital so far by federal soldiers, UN peacekeepers and reinforcements sent from Russia and Rwanda.

But unrest has persisted since the election and on Sunday rebels seized the city of Bangassou, some 750 kilometres (470 miles) east of Bangui, after what the UN peacekeeping force MINUSCA described as a "violent attack".

On Monday, MINUSCA said they had "secured" part of the city of some 30,000 inhabitants after sending in reinforcements a few hours before the expected announcement of the results.

Bangassou was "calm but tense, with armed elements present in some parts of the city", MINUSCA spokesman Vladimir Monteiro said in a statement, adding that just two soldiers had been hurt in the fighting.

"Public buildings have been secured... and so are not occupied," he said.

However, Doctors Without Borders mission chief in CAR Emmanuel Lampaert told AFP: "It is clear that the city is controlled by the rebels."

Earlier on Monday, CAR prosecutors launched an investigation into former president Francois Bozize, accused by the government of plotting a coup with the help of armed groups ahead of the elections.

Bozize, who denies the allegations, came to power in a coup in 2003 before being overthrown in 2013, after which the country slid into sectarian conflict.

The 74-year-old former general slipped back into the country in December 2019 after years in exile, sparking fears that he planned to mount a violent comeback.

He was barred from contesting the December 27 vote by the CAR's top court as he was the target of a 2014 arrest warrant for murder and torture and was under UN sanctions.

With Bozize out of contention, Touadera was the clear front-runner.

Africa » Be a reporter: Write and send your article » Subscribe for news alert
Tags: CAfrica, Vote

Biden lashes out at Trump after election win confirmed