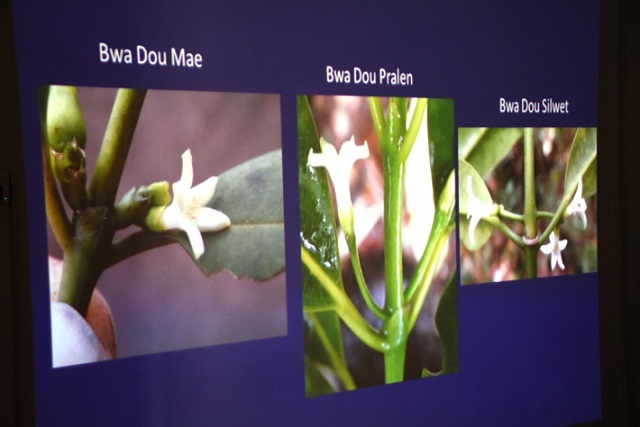 Two new endemic species of ‘Craterispermum’ — known in Seychelles as ‘Bwa dou’ — have been revealed by the Seychelles National Herbarium.

Previously it was believed that there was only a single species of ‘Bwa dou’, a flowering plant, which was found as three separate sub populations on the three largest granitic islands of Mahé, Praslin and Silhouette islands.

Craterispermum is a genus of flowering plants in the family Rubiaceae. The different species of Craterispermum occur in tropical Africa and Seychelles – 115 islands in the western Indian Ocean. It is the only genus in the tribe Craterispermeae, of which the divergence time is estimated at 34.8 million years ago.

In a presentation last month at the National Museum of History of Seychelles Padayachy gave an overview of the two-year study and adventure – amidst some hardships - which culminated in this brilliant discovery for the islands’ biodiversity.

“Discovering, classifying, and describing a new species is a long process. Discoveries often require challenging field studies in remote places. Before conducting the field study, the researchers have to make sure that they acquire the necessary support and authorisations for conducting the research, collecting specimens and sending samples out of the country for genetic analysis, incorporating changes and revisions from co-authors and finally getting the actual paper accepted by the editors of the scientific journal,” explained Padayachy.

According to the scientist “herbarium and field studies revealed that the Craterispermum species occurring on the islands of Mahé, Praslin and Silhouette, on closer inspection, are different in their appearance as well as being geographically separated from each other. This study also demonstrates clearly that these new species differ from any another previously identified species,” she added.

Conservation biologist Elvina Henriette has welcomed the news of the third species of "Bwa dou" on the islands. "It shows that we still have new things to discover in Seychelles hence the need to continue research and conservation efforts. For this we need to enhance the development of young professionals to undertake such important work," said Henriette.

The study was supported by the Critical Ecosystem Partnership fund under the ‘National network on biodiversity data exchange for improved KBA management in Seychelles’.

The publication was also made possible thanks to the joint effort of co-authors affiliated with different international research institutes ‒ Meise Botanic Garden, Swedish Museum of Natural History, University of Yaoundé ‒ and local partners ‒ Plant Conservation Action Group, Island Conservation Society and the department of conservation within the Ministry of Agriculture, Environment and Climate Change.

Padayachy however expressed her concern at the rate at which Seychellois researchers can publish new species. Albeit the abundance in plant species to be discovered and studied here in Seychelles, there is a lack in necessary support as well as young Seychellois interested in taking part in taxonomic studies.

The minister responsible for Environment has commended the National Herbarium for their remarkable work and important discovery. “If you work hard and stick to what you do, you can achieve great things,” said Flavien Joubert. The minister also spoke of the need to nurture young people who are interested in environmental sciences and the need to provide them with the necessary support for them to reach a level where they can publish their studies internationally.

Seychelles is filled with plants, but how do you identify them? The website iNaturalist can help