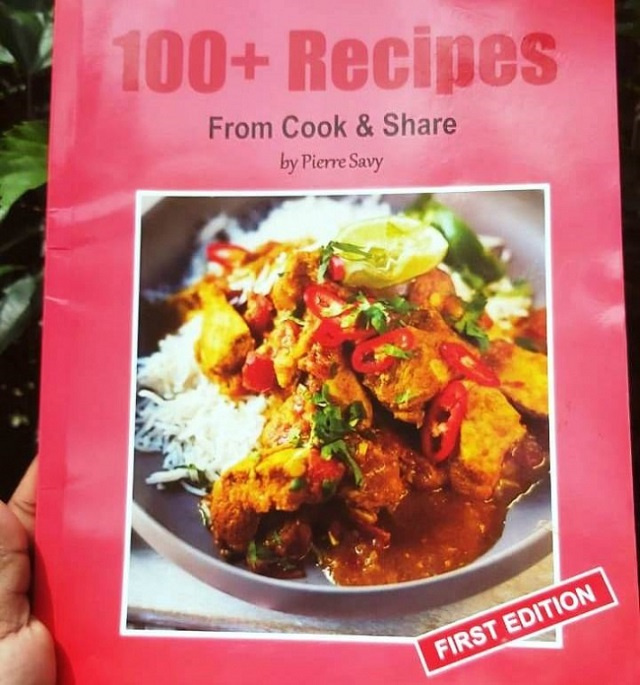 The book is a compilation of Savy’s most liked, commented and shared recipes on his social media page, created in April 2020, which currently has over 25,000 members. (Seychelles Nation)

(Seychelles News Agency) - ‘Cook & Share,’ a new gastronomy book by a Seychellois living in Silvaplana, Switzerland is inspired by recipes shared on a Facebook page with the same name.

Pierre Savy – a home chef, as he refers to himself -- is a foodie who hopes that the collection of Seychellois and international dishes will inspire more people with a passion for cooking to not only cook but to share their dishes and recipes.

The book is a compilation of Savy’s most liked, commented and shared recipes on his social media page, created in April 2020, which currently has over 25,000 members.

“Before I made the group, I was posting some dishes I made and people enjoyed it, even though I am a home chef and not a professional chef. At some point I decided to create my group to provide people with recipes as they requested in the comments and to have the members share recipes as well,” explained Savy.

Savy added that he wanted to share with people, especially beginners, his knowledge and love of cooking. “In the first few weeks there were already 10,000 members, and now it has reached more than 25,000. This shocked me for I did not expect this response,” said Savy.

Savy spent his childhood on Praslin – the second-most populated island of Seychelles -- and studied hospitality at the Seychelles Tourism Academy (STA) where he studied restaurant and bar. After he graduated from STA, Savy took up employment at L’Archipel hotel on Praslin where he worked until his departure to Switzerland, where he is a manager in a tourism establishment.

But how did the idea of the book come about? “One day I decided that I wanted to compile all the recipes I have shared, for reference purposes, and while I was compiling them, I wondered why not try writing a book to make recipes more accessible to people especially members of the group who always message me asking for recipes already posted,” explained Savy.

According to the foodie, the recipes in the book can be found online but has his personal touches. “I have made 95% of these recipes to try and also get pictures to post. You will not find many recipes with seafood or chocolate. The book contains a mix of recipes, some international, western and local as well. Currently, I and my mom are working on compiling local recipes so that they can be in the next edition which will hopefully be published around March or April next year,” said the home chef.

The ‘moutay,’ a cake made from rice and flour and soaked in sugar syrup, and another cake, the ‘napoliten,’ along with the buttered garlic octopus are among the favourites dishes featured in the book.

The first edition of Cook & Share was printed in 1,000 copies in Switzerland. Savy, who was in his native Seychelles – 115 islands in the western Indian Ocean – for holidays, is selling the books at $24. These are not available in bookstores yet but can be ordered directly through the Cook & Share Facebook page.