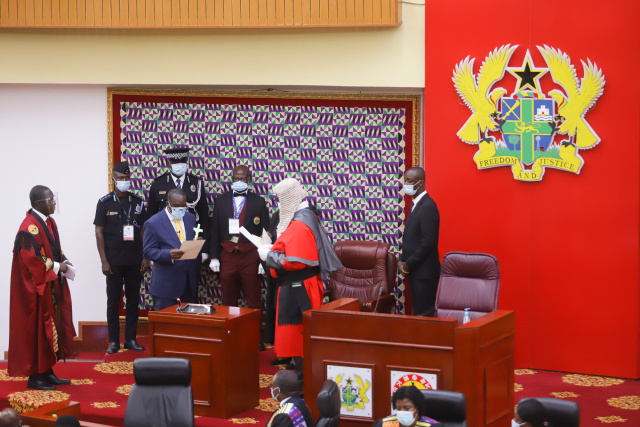 Alban Bagbin (C-L) of the opposition party National Democratic Congress is elected as the speaker of parliament at the State House of Ghana in Accra, Ghana on January 7, 2020. (Nipah Dennis / AFP)

(AFP) - Ghanaian soldiers intervened in parliament to quell a clash between opposing parties in chaotic scenes overnight ahead of the body's swearing-in on Thursday.

Mayhem erupted after a lawmaker from the ruling party tried to seize the ballot box during the vote for parliament speaker.

The ensuing clash lasted several hours until the army moved in, with national television broadcasting the drama live.

"There was total breakdown of law and order," said MP-elect Kwame Twumasi Ampofo of the opposition National Democratic Congress (NDC).

"Looking at a member of parliament and a minister of state snatching ballot papers... was so shameful."

The new parliament is split down the middle between the two main parties, posing the risk of gridlock on tackling Ghana's problems.

President Nana Akufo-Addo, who narrowly won re-election in the December 7 vote for the legislature and head of state, will also be sworn in on Thursday.

Ghana stands out as a stable democracy in volatile West Africa, although the elections were marked by opposition accusations of fraud and five people died in violence.

Observers, both Ghanaian and foreign, viewed the polling as generally free and fair, but some controversies remain over the work of the electoral commission.

More than a dozen opposition MPs were charged with unlawful gathering on Monday after protesting the election results.

Footage from the overnight confrontation in parliament showed some of the legislators shouting and brawling with rivals.

"This is history wrongly being made. We need to bow our heads in shame," said ABA Fuseini, another incoming opposition MP.

"They thought they could bring in the military to intimidate us but we'll resist it. The whole world was watching and everyone must be worried. It's a testimony that Nana Akufo-Addo didn’t win the election," he added.

Samuel Abu Jinapor, an MP-elect with Akufo-Addo's New Patriotic Party (NPP), described the events in parliament as a "complete mess".

The NPP won 137 seats in the 275-member parliament, after shedding 32 in the election, leaving it equal to the 137 held by the NDC.

On Wednesday, an NDC MP was suspended on legal grounds because he had dual nationality, which brought the opposition's ranks down to 136.

Severely hit by the Covid-19 pandemic, the West African nation of 30 million people is expected to see economic growth plummet this year to its lowest in three decades, to 0.9 percent according to the International Monetary Fund (IMF), from 6.5 percent in 2019.

The government also faces the urgent task of reining in mounting debt, which surpassed 70 percent of GDP in September.

"If we don't see consensus being built, I can bet you we're going to see the NDC making life very difficult for the executive for the next four years," said Rasheed Draman, executive director of the African Center for Parliamentary Affairs.

Africa » Be a reporter: Write and send your article » Subscribe for news alert
Tags: Ghana, politics