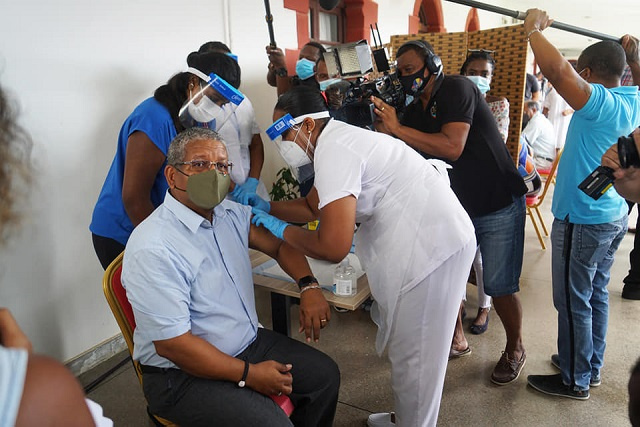 The island nation of Seychelles has become the first country in Africa to roll out its COVID-19 vaccination campaign, with the country’s political leaders and health workers taking the vaccine on Sunday.

President Wavel Ramkalawan, who said he wanted to lead by example by being the first, followed by the vice president, with the cabinet of ministers, and members of the National Assembly were the first ones to take the Sinopharm vaccine.

Health workers  also received the vaccine at the campaign launched at the headquarters of the Ministry of Health at the Seychelles Hospital.

The Ministry described the vaccination roll out as a crucial step in responding to the pandemic and which adds a layer of protection in addition to wearing masks, physical and social distance and maintaining proper hygiene. Seychelles has 50,000 doses of the vaccine.

When launching his campaign for president, Ramkalawan had said that once the first 25,000 vaccines have been administered “Seychelles will become the first country in the world in terms of our vaccination programme because we would have covered at least a third of the population.”

The head of state announced that the UAE will be during the coming days be donating a further 20,000 vaccines, albeit of a different brand. This batch of vaccines will be used for Seychellois over age 60 as they are not included in the Sinopharm campaign.

India is also pitching in to help the Seychelles – 115 islands in the western Indian Ocean - with a donation of 50,000 Oxford AstraZeneca vaccines which will arrive in the country towards the end of January.

Former President Danny Faure, who was also vaccinated, called upon the Seychellois to rally and “everyone pulls in the same direction, so that together we can emerge victoriously and beat this pandemic!” Faure added that the vaccine is another tool in combating the virus but everyone should keep up the effort and adhere to health regulations.

The people of Seychelles are showing their usual solidarity as many are coming forward with donations to help the country’s health authority deal with the spread of COVID-19 among the population. President Ramkalawan spoke about the acts of generosity from the citizens, associations and businesses amounting to $1.8 million.

As of January 11, the campaign will move to the International Conference Centre in the capital city of Victoria. The week after vaccination will be decentralized moving to regional clinics being identified as vaccination centers. The campaign will cover everyone including the expatriate workers as well as those foreigners married to Seychellois nationals, but there may be a cost attached which is yet to be decided.

After the health workers, the campaign will target other essential service providers and their employees, followed by people who have a chronic illness. It will then be the turn of the elderly above 65 years of age, but who do not fall into the category of those having chronic illnesses. The campaign will target different age groups from 60 downwards to 18 years old. Children below 18 have been left out of this first phase of vaccinations, which includes each person taking two doses of the vaccine over three weeks; as they are less susceptible to becoming seriously ill from such infections.

The vaccination campaign, said the president, will send a strong message to the world to say that Seychelles is COVID safe and this will allow the economy to restart.