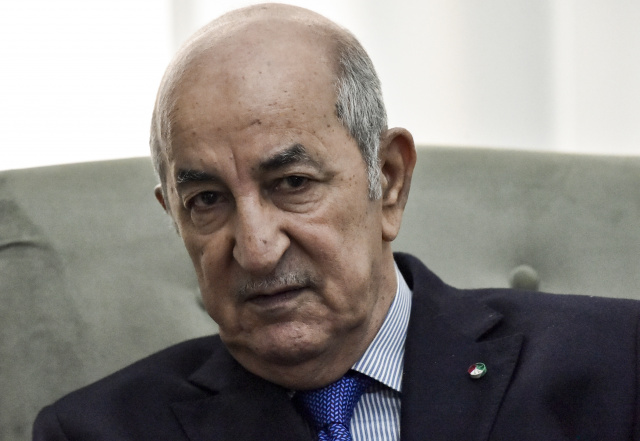 (AFP) - Algerian President Abdelmadjid Tebboune has returned to Germany for treatment of post-Covid-19 complications in his foot, the presidency said Sunday, less than two weeks after he came back to Algiers following his illness.

State television reported that the treatment had been planned before he left Germany in December but was delayed due to "urgent matters" at home and the non-urgent nature of the treatment.

Aged 75 and a heavy smoker, Tebboune was hospitalised in Germany on October 28, and Algerian authorities later announced he had the Covid-19 illness.

"A short time ago, the president... left for Germany for treatment of complications to his foot after he was sick with Covid-19," a post on the presidency's Facebook account said late Sunday.

The presidency did not elaborate on the nature of the complications or the likely duration of Tebboune's renewed stay in Germany.

He had only returned to Algeria on December 29 after a two-month absence.

On January 1, Tebboune signed a new Algerian constitution into law, after approving a 2021 state budget a day earlier, the deadline for approving fiscal plans for the coming year.

Tebboune had previously been unable to ratify the constitution because he needed to be on Algerian soil to do so.

State television broadcast images on Sunday of Tebboune at the Boufarik military airport near Algiers, where he was seen off by senior officials.

A November referendum to approve an altered constitution, strongly pushed by the presidency, received the backing of less than 15 percent of the electorate, in a vote overshadowed by the pandemic and calls for a boycott by the Hirak protest movement.

Tebboune in December 2019 won office in another vote that was widely boycotted, with an official turnout of less than 40 percent.

That came eight months after mass protests by the Hirak had swept his ailing predecessor Abdelaziz Bouteflika from office.

The rallies demanding sweeping political reforms were only suspended when the coronavirus pandemic struck.

Upon his return to the country in December, Tebboune appeared to have regained weight and looked in reasonable health.

He had suggested that he had nearly recovered, but was seen wearing a brace on his right foot.

Africa » Be a reporter: Write and send your article » Subscribe for news alert
Tags: Algeria, politics