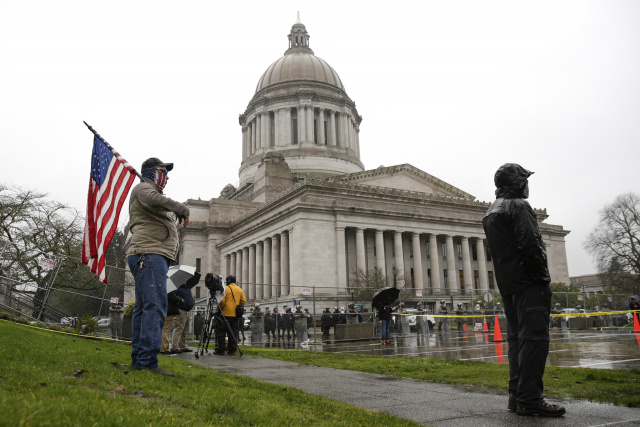 A demonstrator, who wished to remain anonymous, holds a US National flag as the Washington National Guard, State Patrol and a fence surround the state Capitol as the Legislature opens the 2021 session in Olympia, Washington on January 11, 2021. (Jason Redmond / AFP)

(AFP) - US Democrats said Sunday they would push to remove President Donald Trump from office during the final days of his administration after his supporters' violent attack on the Capitol, with some Republicans supporting the move.

Trump could face a historic second impeachment before the January 20 inauguration of Democrat Joe Biden, at a time when the United States is hit by a surging pandemic, a flagging economy and searing division.

House of Representatives Speaker Nancy Pelosi, the top Democrat in Congress, said there would be a resolution on Monday calling for the cabinet to remove Trump as unfit for office under the Constitution's 25th amendment.

If Vice President Mike Pence does not agree to invoke the amendment, "we will proceed with bringing impeachment legislation" in the House, Pelosi said.

"As the days go by, the horror of the ongoing assault on our democracy perpetrated by this President is intensified and so is the immediate need for action," she added.

Trump was already impeached once by the Democratic-controlled House in December 2019 for pressuring the Ukrainian president to dig up political dirt on Biden.

He was acquitted by the Republican-majority Senate.

Though time is running short, Democrats likely have the votes in the House to impeach Trump again and could draw increased Republican support for the move.

But they are unlikely to muster the two-thirds majority needed to convict Trump in the 100-member Senate and remove him from office.

Authorities are seeking to arrest more Trump supporters who violently stormed the Capitol on Wednesday after the president held a rally outside the White House repeating false claims that he had lost the election to Biden due to fraud.

Toomey said that since losing the November 3 vote, Trump had "descended into a level of madness and engaged in activity that was absolutely unthinkable, and unforgivable."

Lisa Murkowski of Alaska was the first Republican senator to demand Trump's resignation, saying, "I want him out." House Republicans, including Adam Kinzinger on Sunday, have echoed that call.

The article of impeachment is set to charge Trump with inciting Wednesday's violence, which left five people dead.

Hundreds of off-duty police on Sunday lined Constitution Avenue in Washington and saluted as a hearse rolled slowly by carrying the body of Brian Sicknick, the police officer who died in the attack on the Capitol.

Capitol security has been stepped up, with a seven-foot-tall (about two meters) black metal fence erected around the historic building. Extremists have threatened new action in coming days both in Washington and state capitals.

One reason Democrats might pursue conviction, even after Trump leaves office, is to prevent him from ever being able to run again for federal office.

The president is reportedly furious over Pence's rejection of Trump's vocal pressure to somehow intervene in the Congressional confirmation on Wednesday of the election result.

Trump has gone largely silent in recent days -- making few statements and holding no news conferences. Twitter, his favored public platform, has banned him for language that could incite violence.

He plans to travel to Texas on Tuesday in one of his final trips as president to highlight his claims of building a border wall to keep immigrants from Mexico out of the US.

Senate rules mean the upper chamber would likely be unable to open an impeachment trial before January 19, and Toomey said he was unsure it was constitutionally possible to impeach someone once out of office.

Some Democrats, for their part, have expressed concern that a Senate trial would overshadow and hamper Biden's efforts to quickly lay out his agenda, starting with the fight against the coronavirus and the need to support the economy.

"Let's give President-elect Biden the 100 days" at the start of his term to deal with the most urgent issues, Democratic House whip James Clyburn told CNN.

"Maybe we'll send the articles sometime after that."

But Senator Joe Manchin of West Virginia, a centrist Democrat whose vote could be crucial in the new, evenly divided Senate, told CNN an impeachment after January 20 "doesn't make any common sense whatsoever."