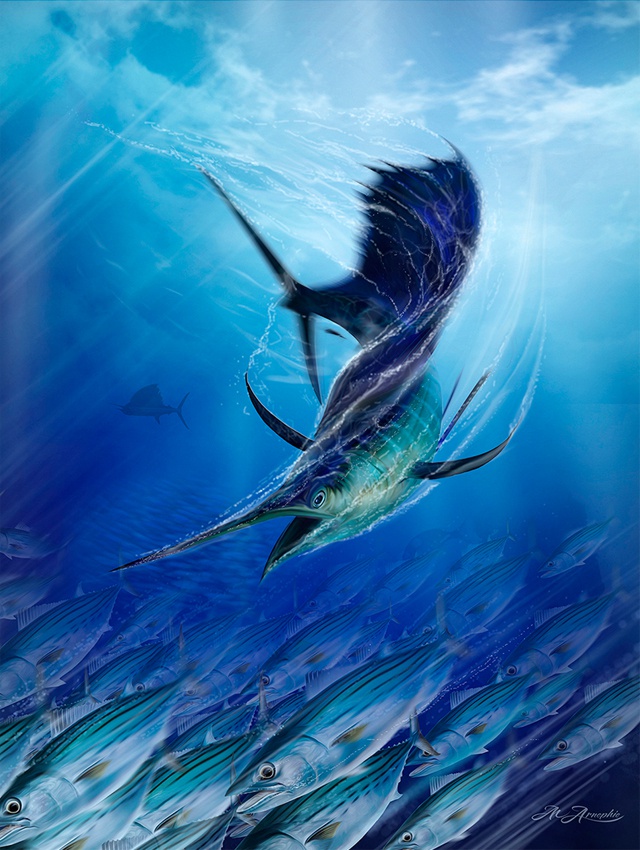 Michael Bouchereau Arnephie's artwork titled ‘Sailfish Mackerel Hunt’ that has been chosen by the judges at Marlin Magazine to enter into the reader’s choice award.(Micheal Arnephie)

(Seychelles News Agency) - A majestic sailfish cuts through crystal blue waters leaving trails of tiny bubbles in its wake, its long sharp bill pointing towards the school of mackerel it is chasing into the deep. One might be forgiven for thinking this was a photograph at first glance, but the image is a unique creation of Seychellois artist and keen sports fisherman, Michael Bouchereau-Arnephie.

Bouchereau-Arnephie was one of 67 talented artists who submitted their work for the Marlin Magazine’s 2015 Marlin Offshore Art Gallery competition. A selection of 10 to 15 finalists chosen by the Marlin staff will be featured in the December/January issue of Marlin Magazine, along with one "Reader's Choice" voted on by readers and fans.

His supporters only have until September 30 to vote for his artwork, entitled ‘Sailfish Mackerel Hunt’, which can be voted for by liking Bouchereau-Arnephie’s entry on Marlin Magazine’s Facebook page. Currently, the Seychellois is in second place with some 1,434 votes behind American artist Peter Agardy's Screamin' Reels, which has almost 1,600 votes.

The secretary of the Seychelles Sports Fishing Club (SSFC), Grant Heyer, has said on the club’s Facebook page that a ‘like’ for Bouchereau-Arnephie was also a ‘like’ for Seychelles.

“Marlin Magazine has 382,000 readers, so it is another group of people worldwide we will be getting the message out about Seychelles and sports fishing but through artwork to begin with this time, which is an interesting twist,” he told SNA.

The artist was born and raised in Anse Boileau on the west coast of Seychelles’ main island of Mahé, which is home to about 86 percent of the country’s total population of 90,000. After studying fine art at the Seychelles Polytechnic in 1986, he left his tropical island home to work as a freelance fashion designer in Melbourne, Australia for well-known clothing brands such as Hang Ten, Ocean Breeze, Amco Jeans, and Slazenger Sportswear.

Influenced by both the Victorian painter Marianne North, who immortalised countless images of the natural wonders of Seychelles, and the marine environment he so enjoys fishing in, his portfolio has been described as a cross-section of his many artistic skills and styles.

Speaking to SNA in an email interview, Bouchereau-Arnephie, who is an executive committee member of the SSFC, said he was asked by Heyer to submit an artwork for the previous year’s competition, but he said he felt there was insufficient time to prepare his entries.

“He has been reminding me for one year so I don’t miss the deadline for 2015,” he said.

Bouchereau-Arnephie said that although he had painted a variety of different subjects and landscapes, his marine life paintings came about from being out on the water fishing almost every weekend, which made his research and knowledge of his subject matter easier.

He submitted three artworks for consideration and ‘Sailfish Mackerel Hunt’ was chosen by the judges at Marlin Magazine to enter into the reader’s choice award.

For club and country

Although Bouchereau-Arnephie said the quality of the other entries was high, as most of the participants were well-established artists from all over the world, he appreciated his fellow Seychellois voting for his submission.

“The results for this particular online voting one has to be a little biased as it is not just self-promotion but for the club and the whole country,” he explained.

“I would like to say a big thank you for those who have given their support,” said the artist, noting that he still had quite a significant gap to close between himself and the front-runner.

Bouchereau-Arnephie also warned that liking the photo he and others had shared on their own Facebook pages and profiles would not be counted by the judges, stressing the need to like the original entry posted on Marlin Magazine’s Facebook page in order for the vote to count.

“We have till the 30th of this month to keep trying and we will see what happens by then,” he said. “A vote for me is a vote for Seychelles and I would like to get the rest of Seychelles behind me by simply giving a little like,” he said.